It's the unofficial, official start to the summer.  And no doubt a lot of us will be BBQ'ing this weekend!

Here are some easy (and 100% tasty) things to cook up and share!

Guacamole!
You might not think of this when you think of BBQ, but I love how easy this is whip up and how delicious it is chilled on a hot summer day. 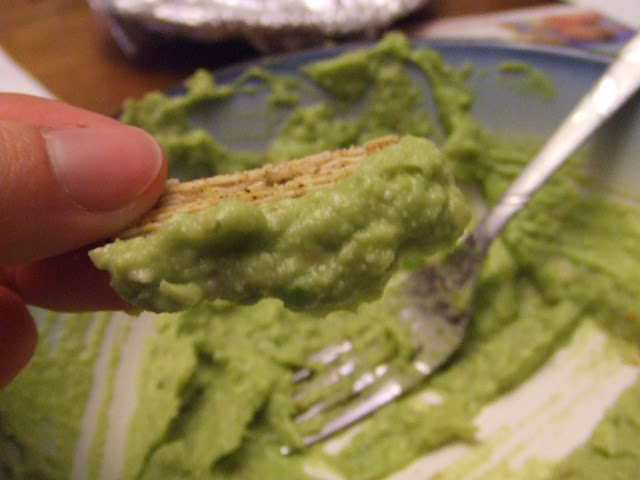 I started off with lots of recipes and have really simplified things after a making this a few dozen times.


Start with 1 ripe avocado.  Look for one with dark green skin and that you can squish a little with your fingers. If you can only find hard avocados, one trick I have learned is to leave them on the counter in a brown paper paper for a few days till they are squishy.
Mash the avocado fruit after cutting it out of the skin (cut around the big round seed in the middle).  I then add some combination of the following (to taste):

Once you mix that all up, taste, and tweak to your liking from there. I have also seen lemon juice, cilantro, and salsa added to guacamoles.

Part of the fun is putting your own spin on it or making it to compliment you specific taste for the day!  It's great as a dip with crackers or chips.  It's yummy as a spread on sandwiches.  And I honestly can't resist eating it right off my finger from the bowl -YUM!

Next up... Twice Baked Potatoes

These have a lot of bang for the effort -- plus who doesn't like potatoes that sing with their BBQ? 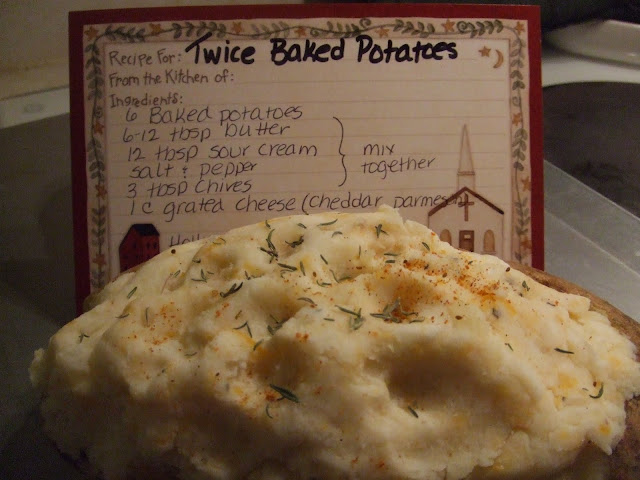 I made a few tweaks from the hand written recipe provided by my mother in law.

I didn't have sour cream on hand, so I substitued greek yogurt (YUM!).  I also only made two monster potatoes for Mr. Happy and I.

Lastly, I noticed this days later.  My mother in law cuts the potatoes in half and then scoops out the insides.  Then refills what looks like mini boats.  I accidently forgot the "cut in half length-wise" step and just scooped out the whole potato.  I think they are nice either way.  But, I think I will try the cut in half ones next time, since these were HUGE and we only ate half of them anyway.
So, to make these.  Grab a few potatoes.  Wash them and poke a few holes in them with a fork.  Then zap them in the microwave to cook them (you can cook them in the oven... but this is so much quicker!).  I think I used about 10 minutes for two hu-mung-o potatoes.

Once cooked, either cut in half length-wise or just scoop out the whole potato.  Put the innards in a bowl.  Mix with cheddar cheese, sour cream (or greek yogurt), butter, salt and pepper, and chives.  You can also add bacon if you like!  Mix those together and then put the mixture back into the potato skins.  Bake the skinds for about 15-20 minutes at 325 degrees.  And voila!  Topped with a little shredded cheese and dill = fancy potatoes that are sure to be a crowd pleaser!

We'll finish off with a Rack of Ribs!

My mouth is drooling just thinking about them! 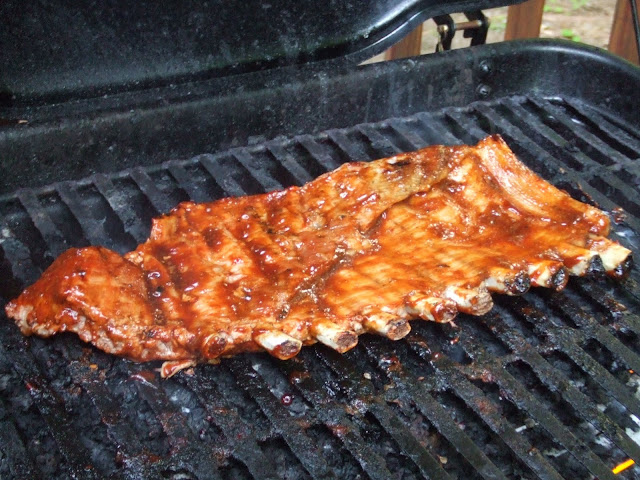 Mr. Happy can really make a killer [insert anything here] on the grill, but he really wow'ed me recently with these ribs!

He cooked them for about 4-6 hours in the crockpot with the ribs covered with broth, BBQ sauce, garlic, salt, pepper (and some other stuff that he was feeling at the moment).

When he took them out, they were already tender and flavorful.  The looked a little something like this: 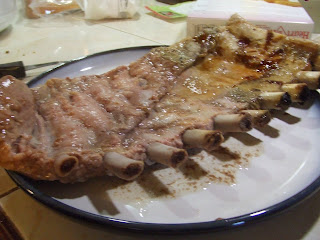 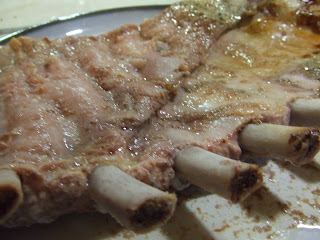 His next step was to slather them with BBQ sauce.  His BBQ sauce of choice was this: 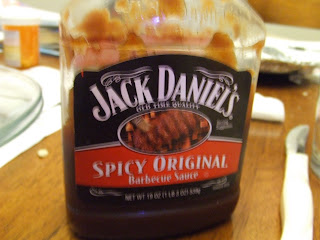 Then he put the ribs on the barbie... or the grill rather.. and let the BBQ sauce carmelize in the heat from the grill. 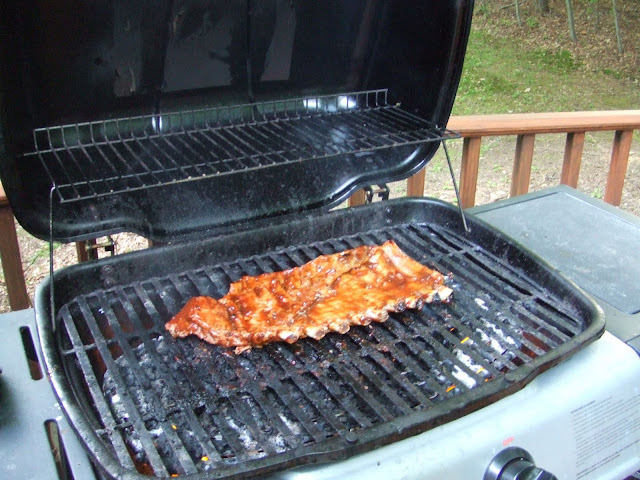 By this time I couldn't hardly hold myself back.  I mean there. they. were.

The ribs of my dreams.  Just begging to be ate.  Fully cooked and ready to go.  Come on grill, finish those puppies up!  Pha-lease!

Are they done yet? 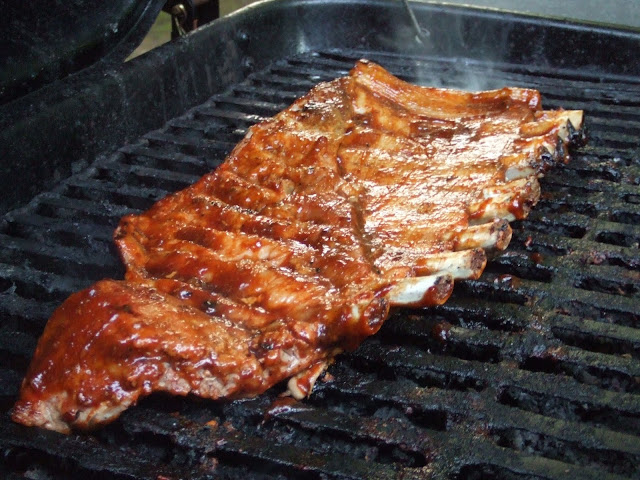 Are they done yet? 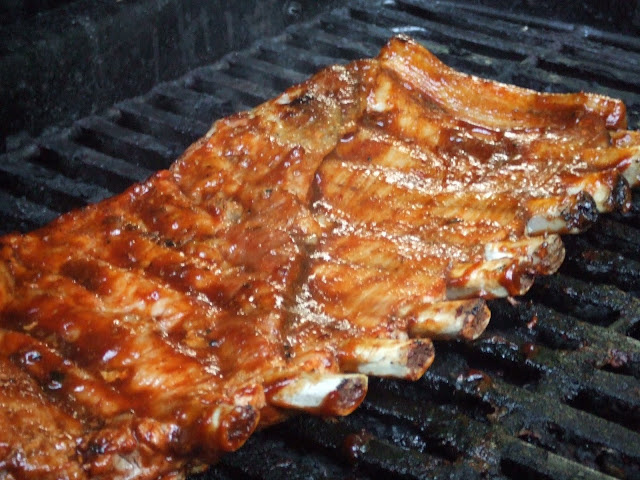 The table was full.

So was our mouths.

And then our bellies.

But really it made me even more excited about all those summer-y things we have coming up!

It really is an awesome time of year!

gosh i just have to try some of these out they look delish! hope your long weekend is going great!

It's supper time where I am and this post really made me HUNGRY! Looks delicious!

Yum. I make my own guacamole too. Very similar to yours but I never tried grated Parmesan. I will next time for sure.