Till Next Year Halloween - muah!

This year's Halloween was an awesome reminder of how much I love it! 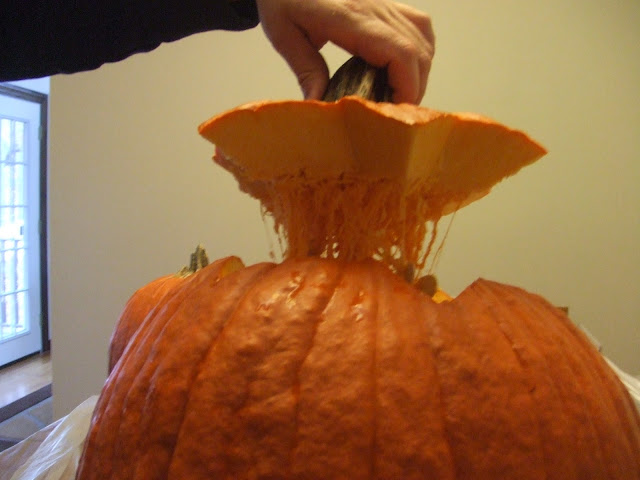 Scooping out the guts! 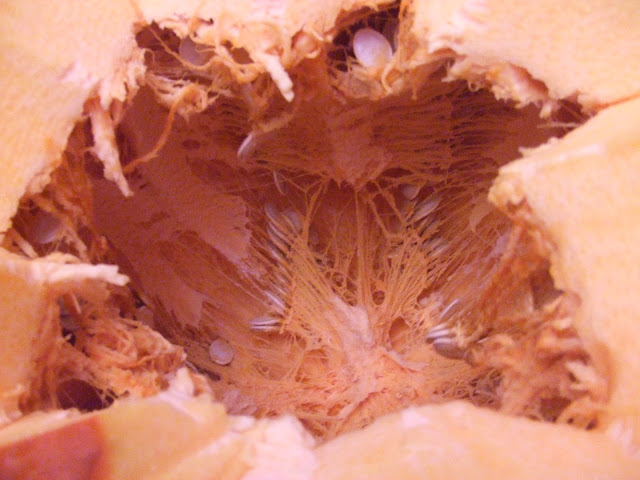 Using those little teenie tiny carving tools to make up a design in the side of a pumpkin -- while wearing your costume! 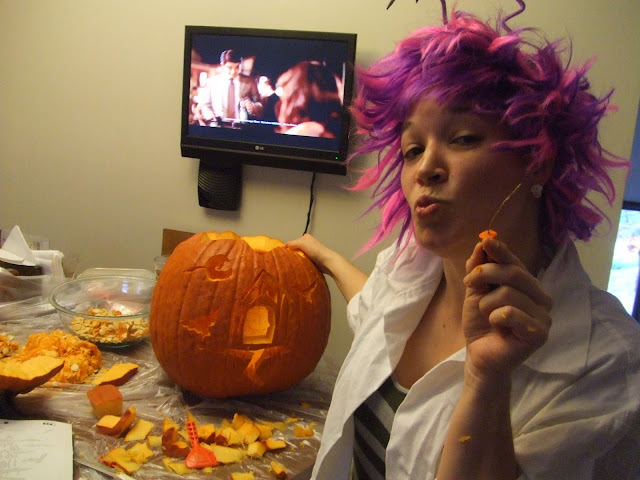 Setting up a scary scene for the trick-o-treaters!  (no dogs were harmed in the making of this scene, although she does put on a good "help I'm in jail" face, doesn't she?) 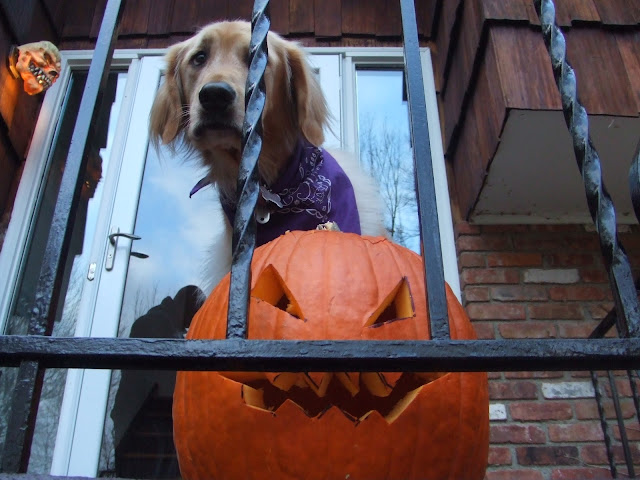 Finding new ways to use an old mask to scare up the light on our front step.  Spooky! 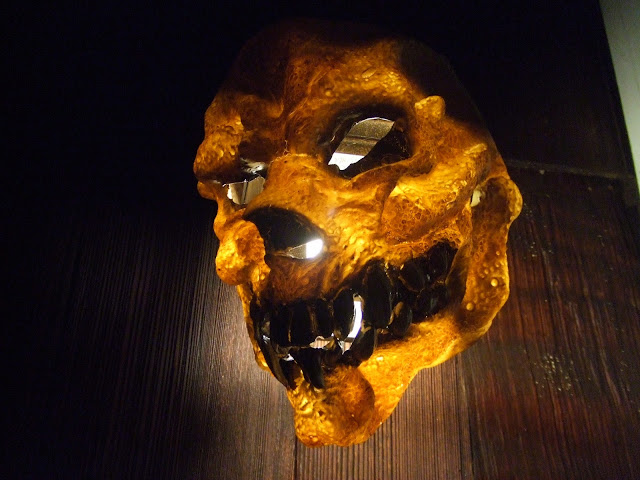 Lighting up the pumpkins -- mine was a haunted house with bats, full moon, and clouds. 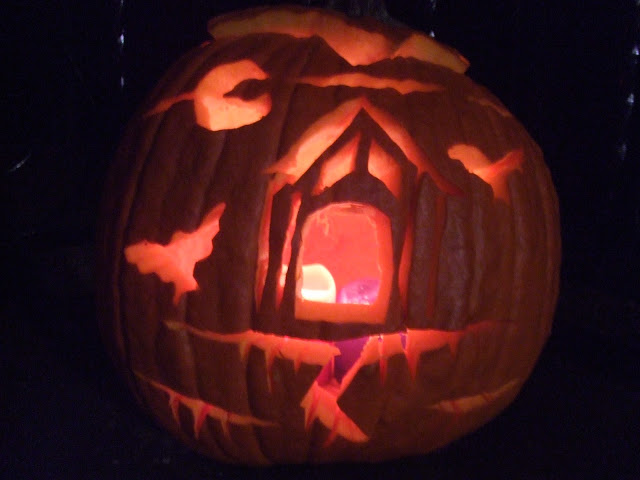 Mr. Happy whipped up what he called a traditional scowl face.  He seriously had this guy carved up and ready to scare before I had even finished scooping out my pumpkin's guts. 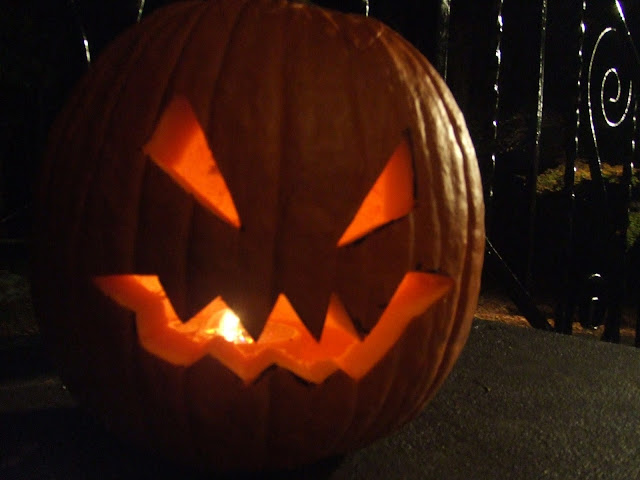 All in all, we had more trick-o-treaters than we thought, we have fun carving pumpkins together, we played Halloween themed games while sitting in front of the fire, and I must say that we were all exhausted in the end. 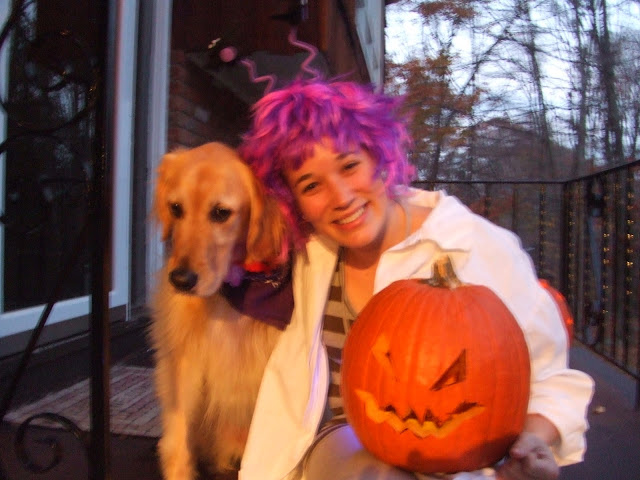 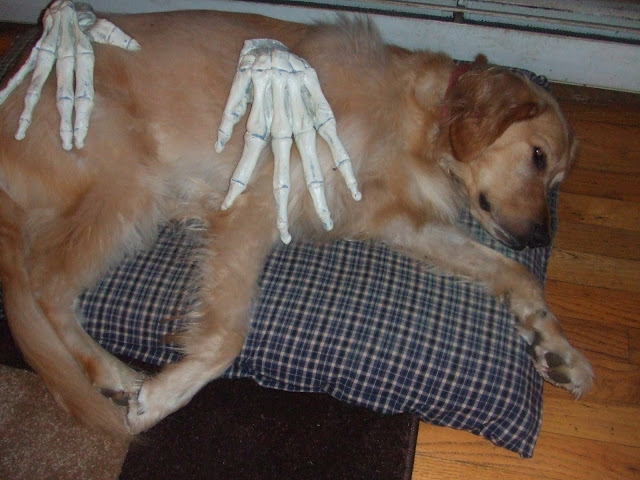 Hope you had a hauntingly good time this weekend!
Now that it's Monday again, I am reflecting on the fact that it is now November - YOWZA!
at 9:51 AM

Woof! Woof! How CUTE. Did not recognize you with your purple hair. Hope you did cooked some yummy food with the pumpkin. Happy November. Lots of Golden Woofs, Sugar

oh what fun for Halloween!!!! it was so much fun this year!!! your photos look wonderful and I love your pumpkin!!!!

LOVE the doggy pic with the skeleton hands!!! looks like you had fun! xxoo happy november to you

@Sugar, I'm not sure Katie was very confident that she knew who I was with all that stuff on.
@Diana, thanks! Aren't pumpkins fun to carve!
@Heather, that last picture is my favorite too. I can't believe she let me do that.. but she was zonked!

Wow, you guys had a lot of fun! That last picture made me laugh out loud!

@Augie and Ti, I still can't believe she held still for the snap. Seriously minutes before she was trying to eat them -- and then she crashed in to sleepyland.

Sugar's got the right idea; you can make some great treats with pumpkin -- in fact I think I've got a recipe for homemade dog biscuits around here that use fresh pumpkin... talk about happy!
- - - - - - -
Jack@PDB
dog beds and more