Sammy is officially three months old now, which signalled our visit to the vet last week.  Sammy has been nothing but fantastic for the vet so, I didn't really have any concerns leading up to the big day.  Shot day. 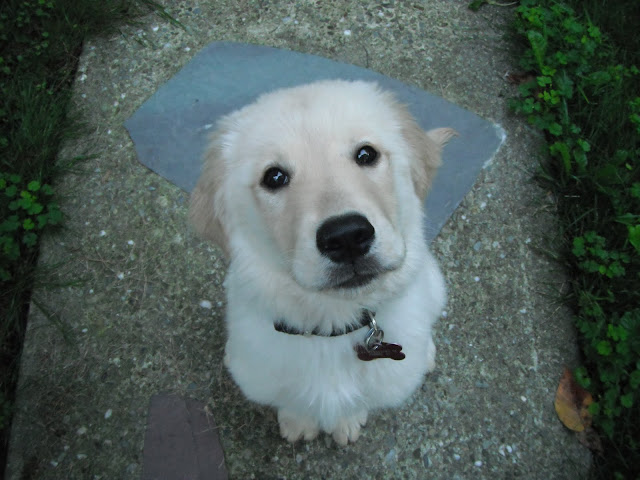 I pulled up to the vet and he was outside speaking with a handyman.  He waved hello as we passed.  I got out of the car and he greeted me asking how things have been.  I said just fine and went to pull Sammy out of the car, as she is riding in the backseat now -- big girl style.  She was a total squirm-worm upon seeing the vet to the point that I wasn't sure if I would be able to hold on to her and my car keys.

As a matter of helping, the vet came over and offered to hold Sammy for me while I got my things together.

And that's when it happened.

Sammy peed all over him.

Luckily, our vet has a good sense of humor (thankgoodness!) and Sammy now has completed her puppy shots (for the most part... I think we go back to the vet in a month for a second shot of lyme and a dystemper booster).  This means she can now officially leave the house and go explore the world!  As you can imagine it's been an exciting week of gaining freedom and starting to see the world in Sammy-land!

Sammy's First Walk to the Lake
I am so excited to be getting back to morning/evening walks with the pups.  Katie and I had really made a habit of it even throughout the winter.  Here is Katie, smitten to be out an a walk. 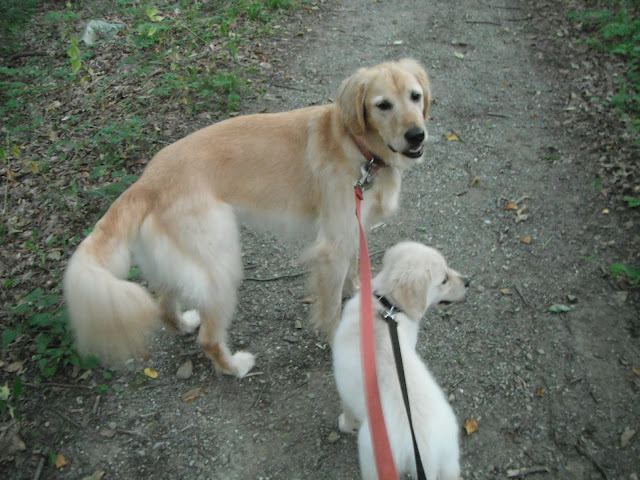 So, how did Sammy's first pack walk go?  Pretty good I'd say.  We have practiced walking on the leash this whole time so she was pretty good at not getting too tangled.  Although, I have to admit I still figuring out the whole walking two dogs and taking a photo at the same time thing. 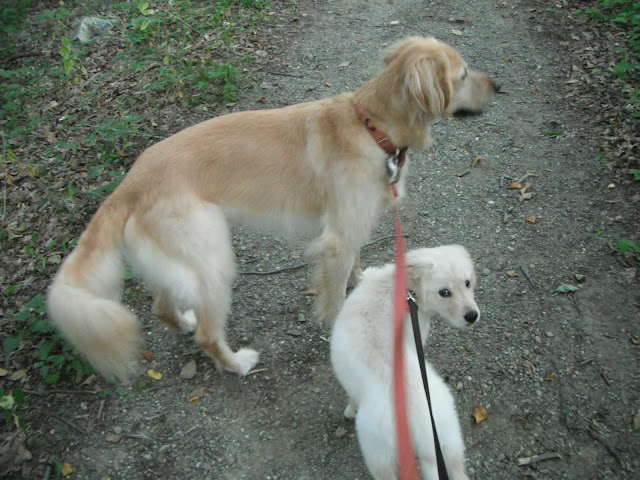 My favorite moment was when we finally rounded the tree line so that she could see the lake for the first time.  She just stopped and you could tell she was just taking the whole thing in.  Big eyes.  Nose sniffing.
Makes me think she was thinking something like, "WOW, that is the biggest bowl of dog water I have ever seen!"
Sammy's First Dunk in the Lake
I took them both down to dog beach.  Nice hot day, means they get to go for a swim or a dunk if they are in the mood.  Sammy walked up to the edge of the lake and respectfully waited.  I splashed my hands in the water to show her that she is welcome to hop in and play.
She didn't ask twice. 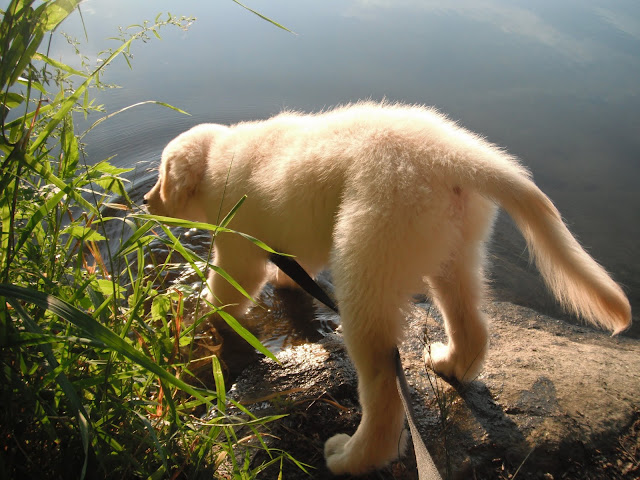 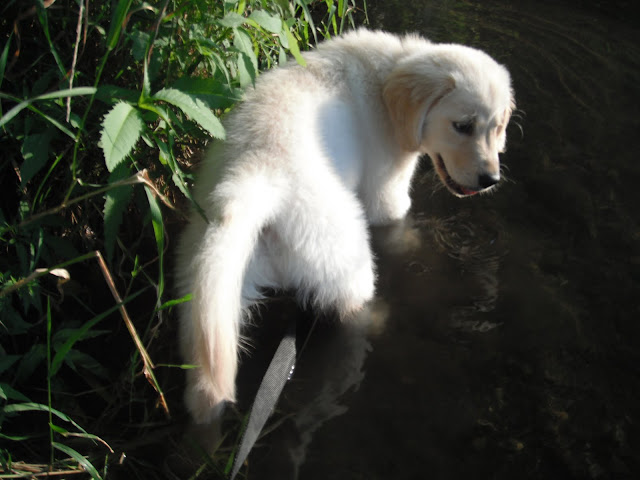 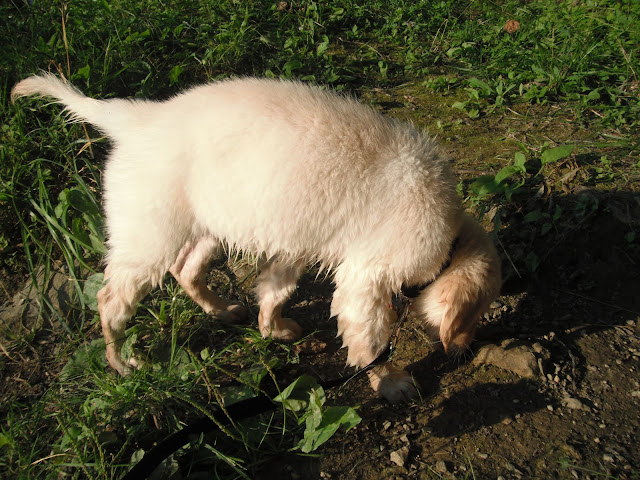 We even saw a tiny frog! 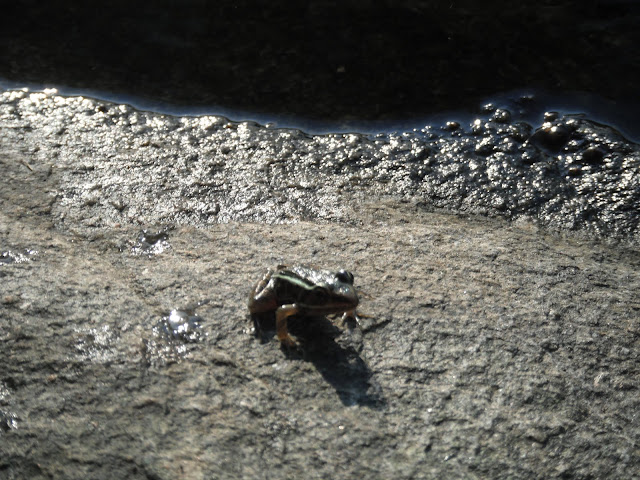 Sammy's and Katie Share a Bone
Katie and Sammy are really starting to show how much they have bonded over the last few weeks.  Here is a good example.  For the most part bones in the house mean one of the dogs has the bone and the other is trying to get it.

But, imagine my surprise when I turn around in my office chair to see this.  They were quiet.  They were sharing.  My heart melted.  I guess they really do like each other!! 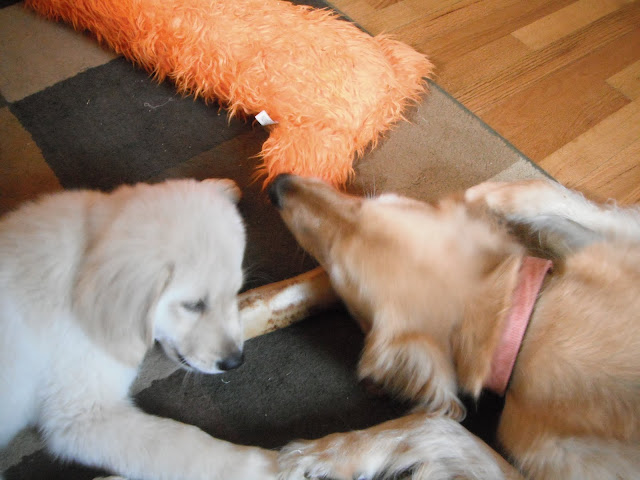 Sammy's Long Car Ride to Grandma and Grandpa's
Sammy has had lots of visitors, but to this point she has only been in the house she was born in, at our house, and at the vet (10 minutes away).
So, it was another big moment when I decided to take her to Grandma's house (silly, I know.... but my Mom and Dad loved meeting her!  After all she is their grand dog-gther).  Here she is tuckered out, laying down like an angel on the ride home. 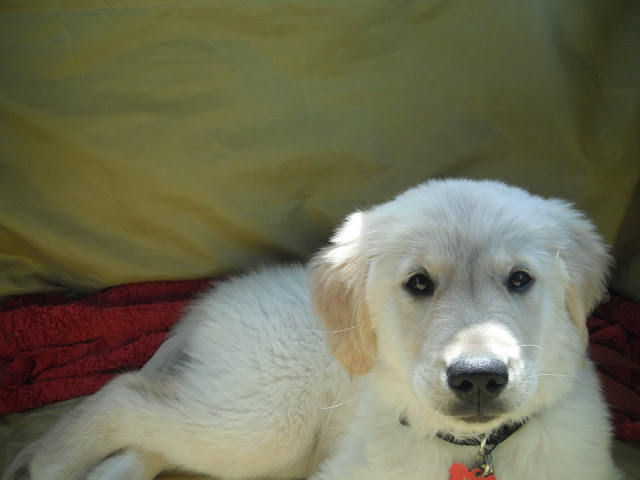 Oh, and I almost forgot.  She also stood up on her hind legs to look out the back window and both side windows.  I got to see some huge smiles from adults and kids alike, passing in their cars, as they saw her in one of the windows.  She brought lots of smiles that day!

And occasionally she rides like this standing up in her travel bucket looking out the front.  This is the view over my shoulder.  So darn cute! 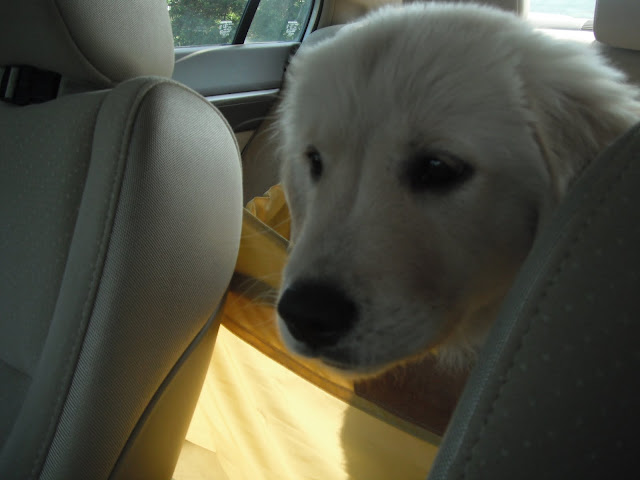 It's been a great summer and things couldn't feel more complete as I hang out with these two.  My gals.  My partners in crime!  Couldn't you just kiss those faces!!  If you want I'll give them a smooch for ya! 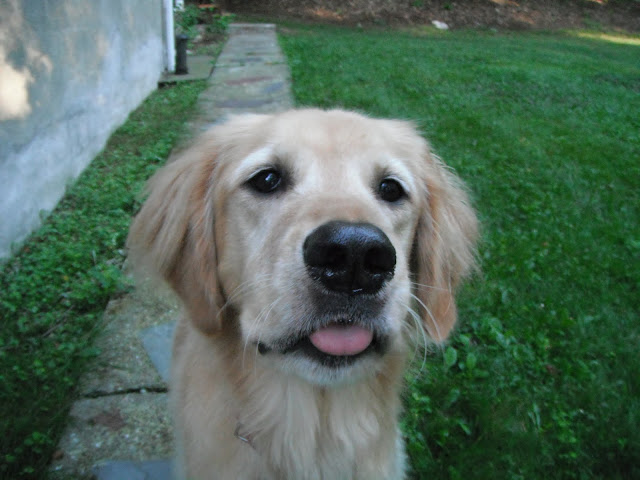 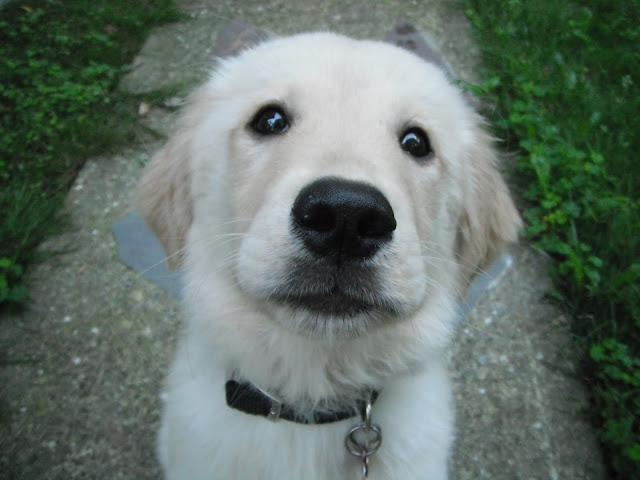 日本のための多くの愛
Much love for Japan
at 10:02 AM

Once again, my spirit is lifted and refreshed with the adventures of your precious dogs. Love those mug shots at the end!

I enjoyed this post and the pics ! I will be catsitting my neighbours cat for a few months ... but the meeting with my own cats isn't so sweet as with Katie and Sammy ! I almost had blood on the walls ;-)

Thank you for the puppy fix - it does my heart good :)

Ooh, smooch them for me! What gorgeous dogs-- I could look at puppy pics all day long :)

Yep! Smooch away! :) Your girls are gorgeous. Thanks for sharing a little more of the journey with us.
P.S. I had a good laugh at the vets little misshap.

What a fun read this post was this morning. Thank you so much for sharing your baby's firsts!

Yay for Sammy! So glad you are sharing her learning and growing with us! My son over my shoulder said "THATS the dog I want!"
Oh brother :)!!