It's been a month since I pulled together all my works in progress and chatted with you about them.  Over due, right?  But I also have to admit that with all the sunshine and warm weather I have been spending a ton of time outside and basically zilch in front of my sewing machine.

But, let's take a look at what is getting attention.

I recently gave in to the Tetris Quilt Along and pulled out scrappy rainbow charms to use as the game pieces.  This quilt along is already so much fun. 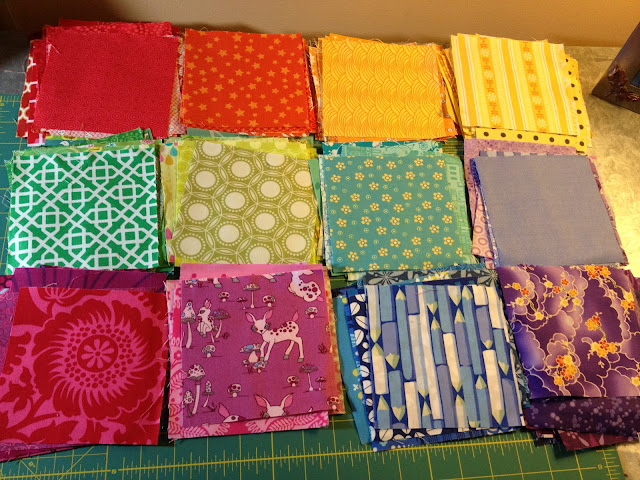 Melissa from Happy Quilting is making the experience awesome by having us actually play the game.. then sew our board.  So, here is my board for week 1. 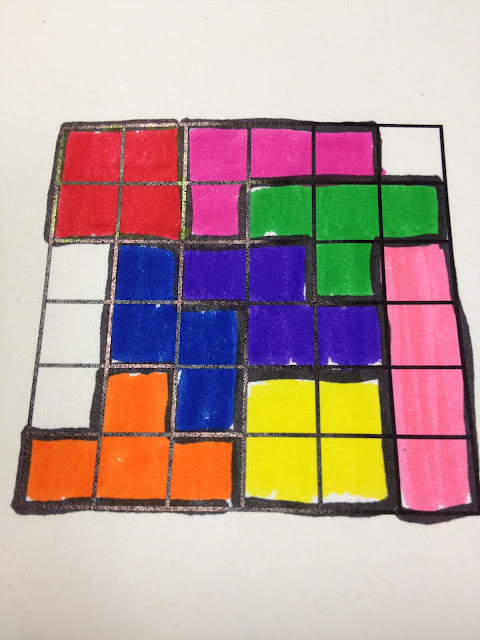 I grabbed the proper colors and then laid out my 6x6 square.  I'm using a creamy white linen to represent the holes where pieces don't end up. 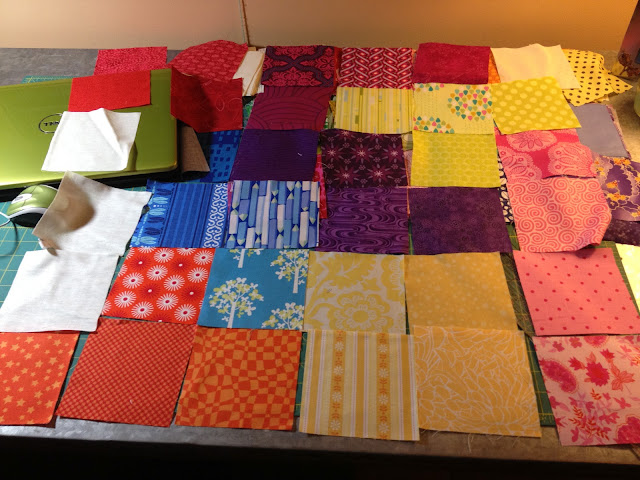 And then I sewed those 5 inch squares together.  Pairs, then rows, then two rows, then the square was assembled.  So therapeutic.  Love the easy sewing element of this project.  My hands and fingers just know what to do and my brain is relaxed and enjoying the process.  What a easy way to ease back into the rhythm of sewing in between summery things.

With the simplicity of the piecing I think I might take this up a notch by quilting each square as I go so I can maneuver the smaller squares for some intricate quilting.  Then I would join all the squares together at the end.  I'll let you know by next week what I decide to do.  Which reminds me... I need to pick up some batting if I'm going to go that route. 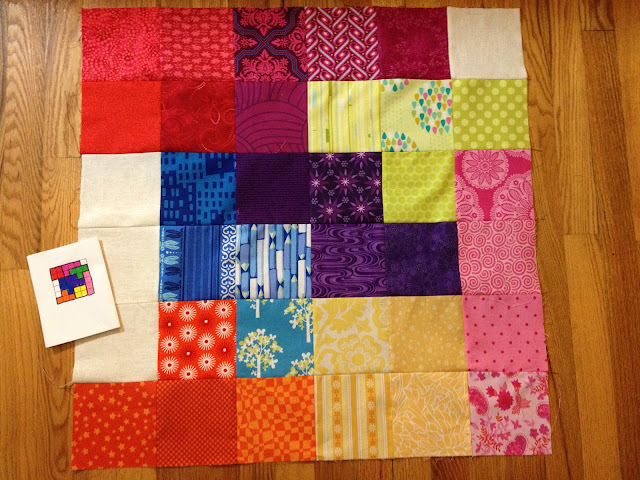 Last time, my four work's in progress were: Prisms, Mushrooms, Hawk, and the City/State Landscape.  Funny how things change in a month.  I haven't touched any of those.

Prism is still on my design wall.  I vowed to myself that the only way it's coming off is to sew it together.  Otherwise it stays.  I lost steam on that one because of all the triangle cutting.  It got to me.  But, I have an idea to get past that.  Which means deviating from the pattern, which I should have seen coming.

I don't think a hand sewing project is actually going to happen any time soon for me.  So, I'm crossing Mushrooms off my list for now.  Hawk is the next one I am going to start.  I'm happy with my research, my sketching, and just need to pick a size and then pick a pose.  I am really temped to do this one as a whole cloth... sketch with thread and then paint and applique feathers and details on top.  The City/State Landscape was something I wanted to do to join in the fun of my quilt guild.  Some days I can see it really clearly.  Some days it's clear as mud.  But, I think it would be fun to capture some of the places I've travelled in quilts.  I'm still tossing around the idea of one for Aruba or Amsterdam.

As for my second new project, you might remember I painted my pup Sammy on fabric.  And I'm happy to report that I have made some progress. 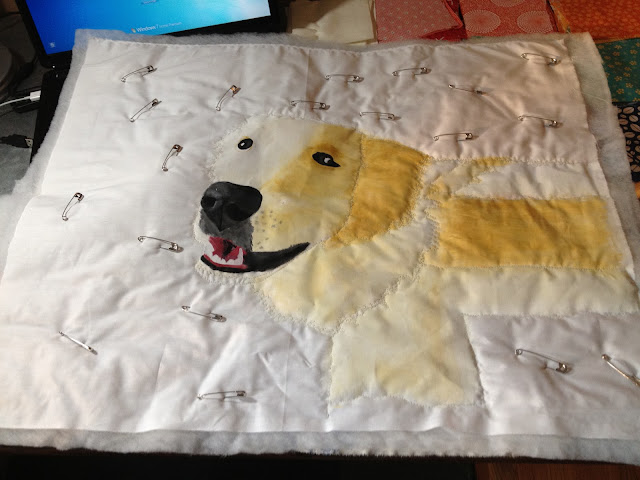 It's sandwiched, basted, and I started some of the outlining.  Lots more to go, but I'm glad I'm getting over my initial fear of ruining the whole thing by quilting it. 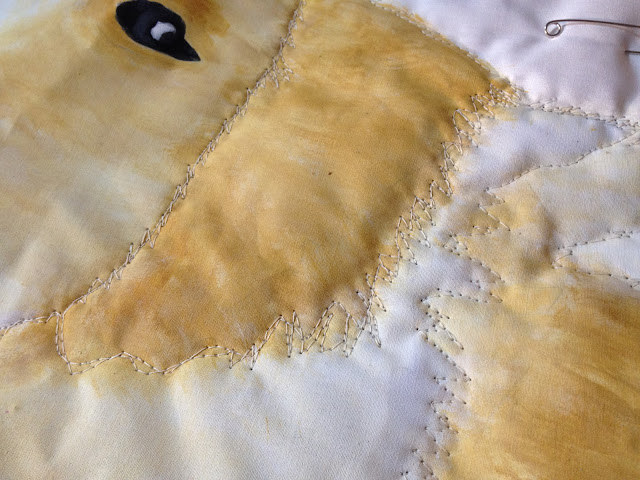 I think the thread painting is really going to add a nice texture and dimension to the otherwise flat painting. 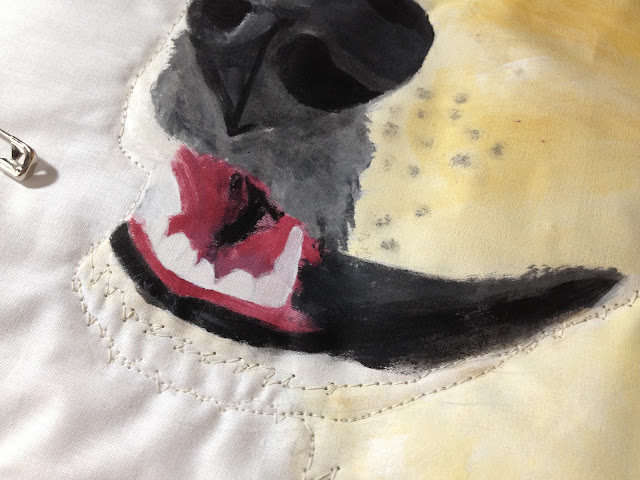 And there you have it.  That's what's going on quilty-wise.  For now.  Until I change my mind a million more times.  We'll see what I actually work on in the next week, if anything at all *wink*

Wishing you gobs of creativity and sunshine!
at 9:01 AM

LOVE the Sammy quilt!!! Too cute. Way to go getting over "fear of ruining"- I feel like that with nearly every quilt top once it's ready to be quilted. Your tetris block is very pretty, too- I kind of wish there was more than one block a week (even though I really didn't need to start anything new!).

Cant wait to see Sammy finished! You're so, so creative! The tetris block looks great...looking forward to that finish too!!

: ) Sweet! Puppy looks FAB. Hey I love Tetris and that block just sings. The color layout is beautiful!
Wishing you gobs back Sista!

The tetris block is so fun! Your fabric painting is beautiful. I always have a hard time starting to quilt for fear of ruining the whole project, but it always works out in the end. You are doing a great job! Thanks for linking up to WIP Wednesday!

an awesome portrait of Sammy, you are multitalented.
Looks also like rubrik blocks :-)

Love the idea of quilting as you go with your tetris block ;) so fun!!!