Ah, the summer fair!  Nothing makes you feel more like a kid.

I know I was ohhhing and ahhhing over all the rides, lights, food, and games to play.  Plus it was a really neat place to whip out the camera and snap away. 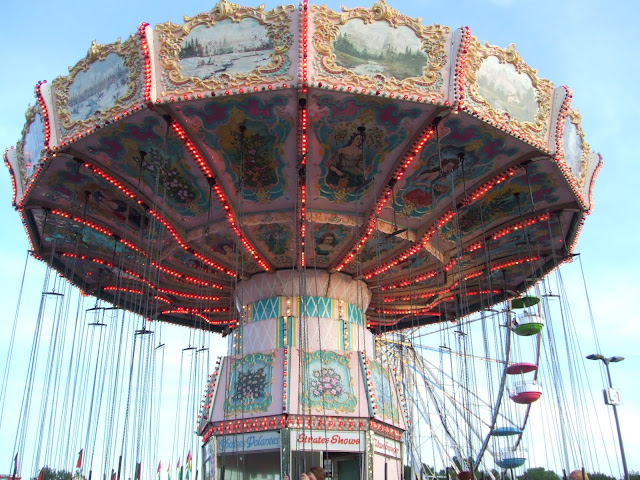 I couldn't get enough photos of the ferris Big Wheel.  Every new angle felt exciting.  It was tall.  It was colorful!  Did I mention it was tall? 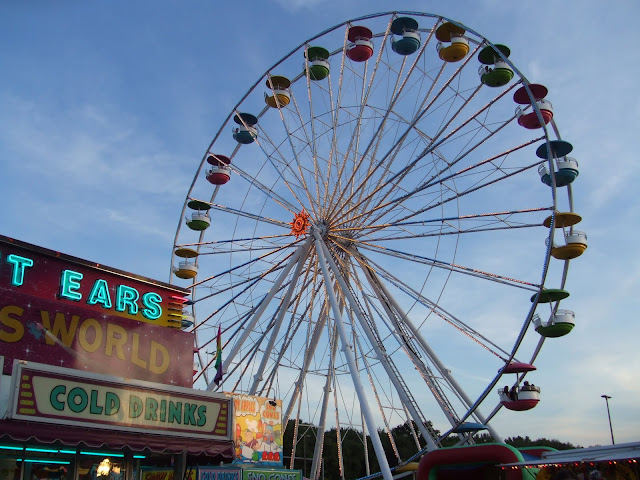 I have a confession to make.  I'm not sure what rock I have been living under, but I haven't really ever been to a fair this big before.  I mean, I have seen the little ones in small towns.  I have rode the occasional ride and taken part in eating fried dough.  But this has to be (hands down) the biggest fair I have seen.

And, my trusty partner in crime, the fearless Mr. Happy, was so willing to stop in front of each ride and tell me about it.  What it does.  How scary it is.  How many times he rode it as a kid.  And then we would watch the ride load up with unsuspecting riders, watch them get whipped around, spun, dipped, dunked, hurled.  And then the ride would stop.  The riders would dismount.  More riders would jump on and the process repeated.

This one blew my mind.  You lay in this sled looking thing superman style.  Then the ride lifts up, spins, and then tilts you so that you can feel what it would be like to fly and then torpedo toward the ground.

It was going soooo fast!

I dont' remember it's name, but if I had to name it... I would call it Flying Daredevil 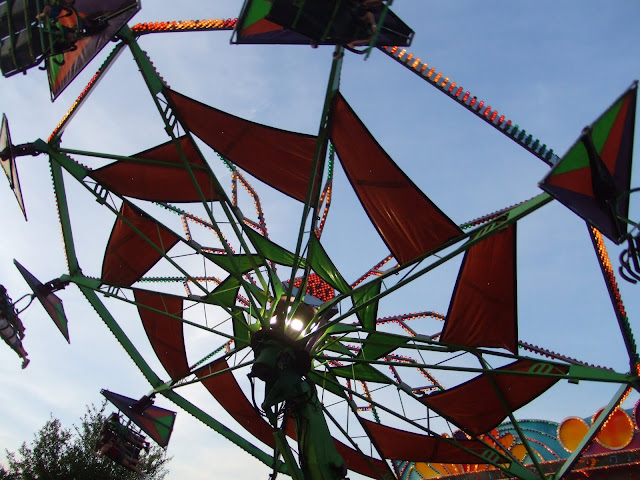 Thunderbolt was like a wavy rollercoaster that went moch 55 and if I remember right it went forward and backward.

The bonus... the ride attendants (they are called that right, or are they operators?) did a funky dance to the music as the ride went on.  Hands in the air... full out... no inhibitions kinda dancing.  Puts a big grin on your face! 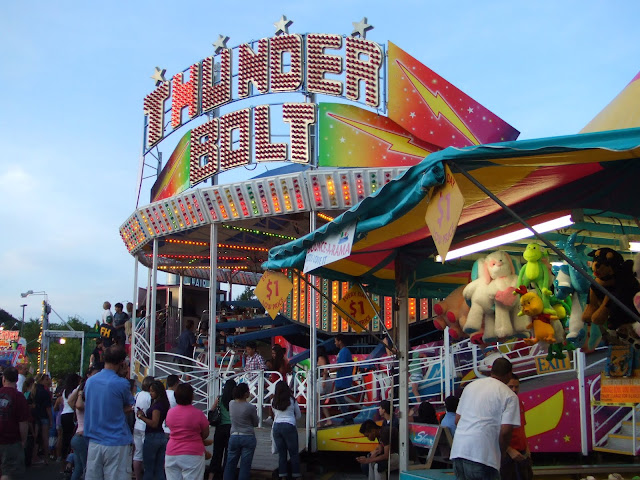 Then there was Fireball.  I may have to come back to good 'ole Fireball as watching it was beginning to make me weak in the knees.

Funny thing about two nerds taking in the fair.  Mr. Happy and I couldn't help but talk about the physics that aid in the stomach hurling properties of each ride.

For example, Fireball is a giant pendulem that twists and swings you this way and that. 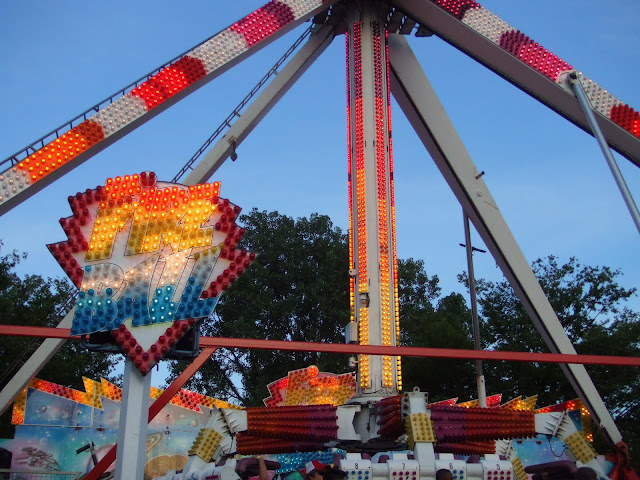 When I saw the Double Decker Carousel, I knew that it was more my speed.  It was so very pretty and sparkly all lite up and belting out it's carousel tunes. 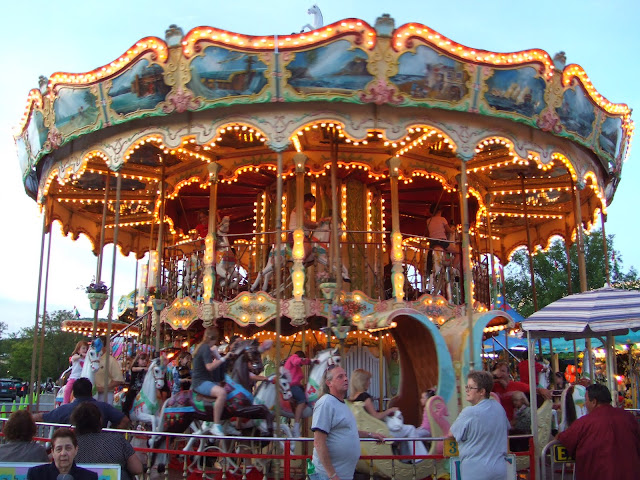 The Monkey Maze made me giggle.  The mural could make your day no matter how tough it was.

Don't you just want to reach over and tickle the arm pits of those two swinging monkeys?

And I swear those alligators/crocodiles are smiling at me. 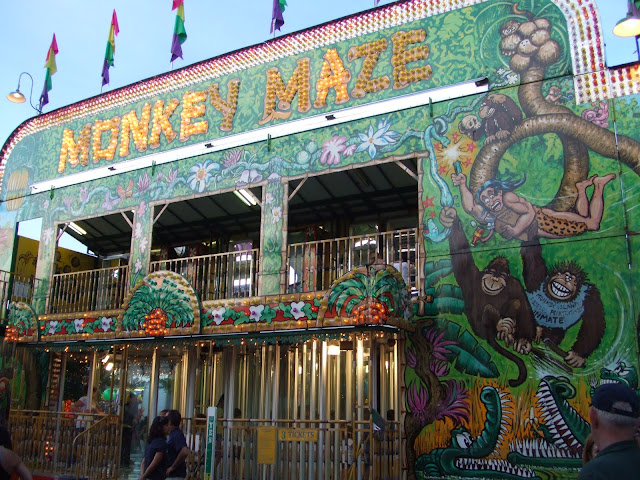 As we wandered about the fair we landed in kiddieland.  All the things for the kiddos looked really fun, but this one really stood out.

Yes, those are children sitting in giant bubbles while floating on about one foot of water.  Once in the bubbles the kids were crawling, rolling, laying, and just plan old having so much fun!  You see, the more they moved the more the bubble rolled and moved on the water.

You should have seen the giant zippers they used to get the kids in or out.

I wanted to try this one.  Mr. Happy didn't think they would go for it. 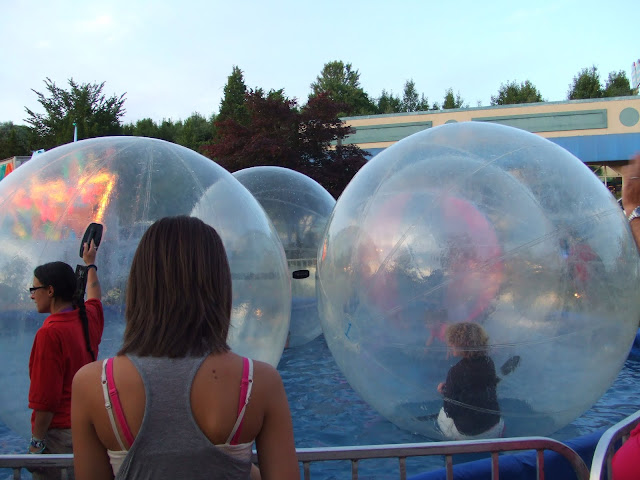 The more we wandered, the more we began to loose the day.

The lights really began to pop! 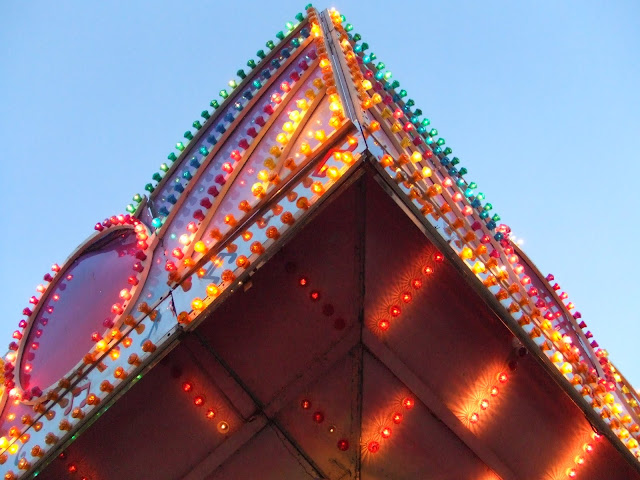 Dusk at the fair. 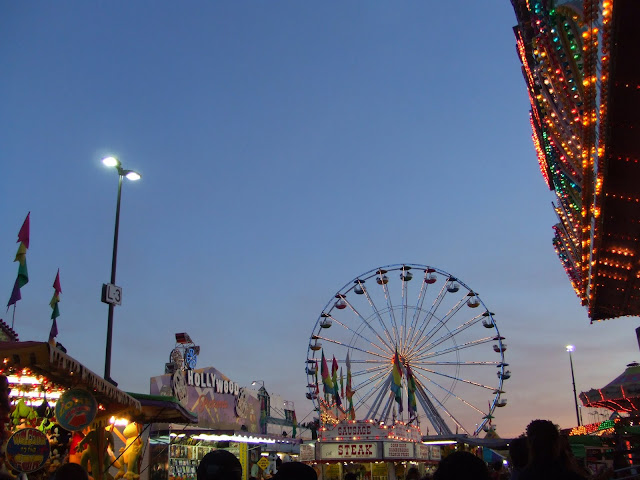 I have more pictures up my sleeve of the fair in the dark.  You won't belive the glimmer and sparkle of it all.  Part II coming later tonight.  Only seems fitting to post night time things at night.

Hope your Monday has all the glimmer and sparkle of a summertime fair!
at 8:52 AM