Confetti: Dog Path in the Woods {part I}

You may remember my small art quilt titled Confetti?

Well, it recently re-inspired me to search (and I don't always know where I'm headed) through the internet.  Searching the words 'confetti' and 'quilt'... and then later 'thread painting'... well, I'm still not sure of the path I took, but I landed on this incredible video featuring Noriko Endo on an episode of Simply Quilts.  Noriko is an amazing thread painting artist and quilt maker.  Seriously ahh-mazing!

Go watch her youtube video... there are actually three of them; here are links to the second and third ones, and then come back and tell me that you aren't incredibly inspired.

I was so inspired that I ran out for tulle asap and dug right into my first project.  I started by picking my photo...which I will show in a minute...and then picking corresponding scraps in the colors of the photo. 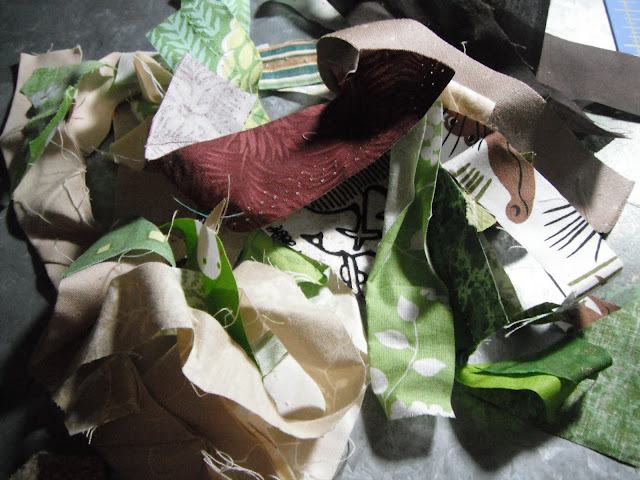 Since this technique uses fabric 'confetti' I started to make my own little palette piles.  Noriko shows using a rotary cutter... I simply used scissors to get the toothpick shaped pieces. 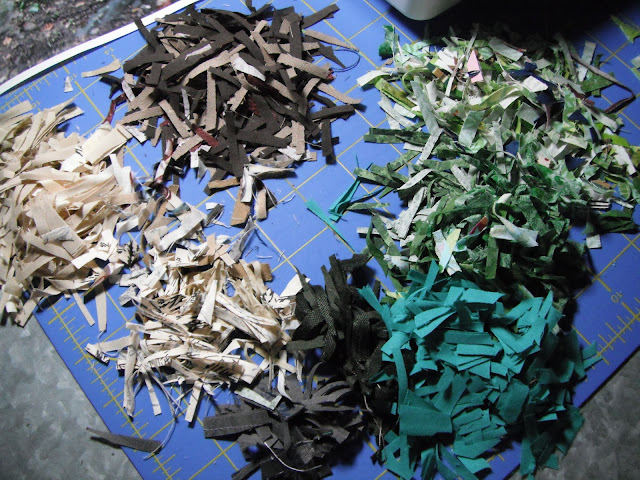 I assembled a backing and batting which would be my 'canvas.'  So giddy at this point!!! 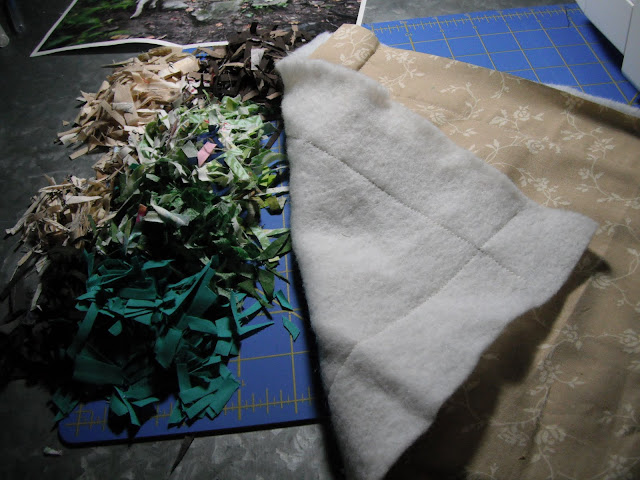 Here is the picture I am trying to translate to fiber.  Any surprise that it's the woods and the pups?

I didn't think so.  Since I practically live there in those woods and spend every free moment with those pups. 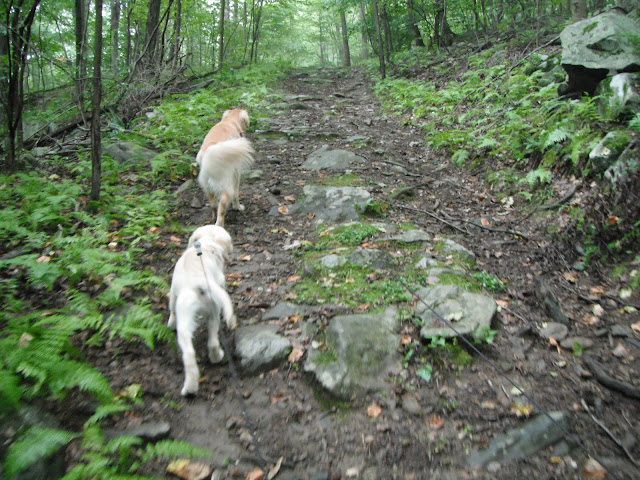 So here, we go.  Time to strategically sprinkle those confetti bits onto the canvas to create fiber magic!  I admit, I started out a bit careful and hesitant. 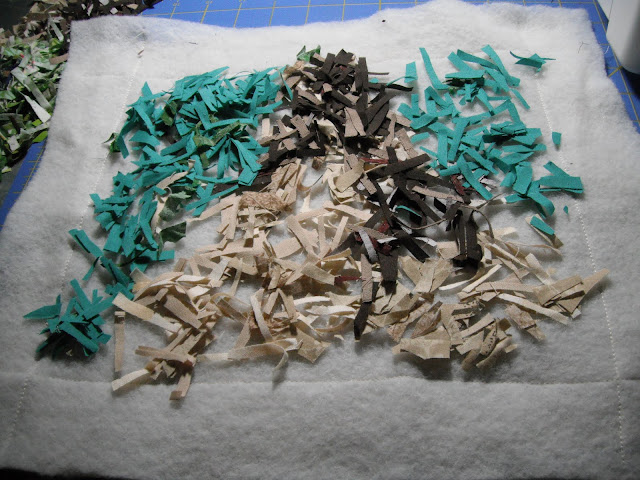 It took a bit to relax, but when I did, I found myself not only having a lot of fun, but also that the colors were nicely placed.  Somehow the chaos was translating into something meaningful.

Aside: are you noticing a theme in my art lately?  Chaos seems to have firm control --- and I like it !! 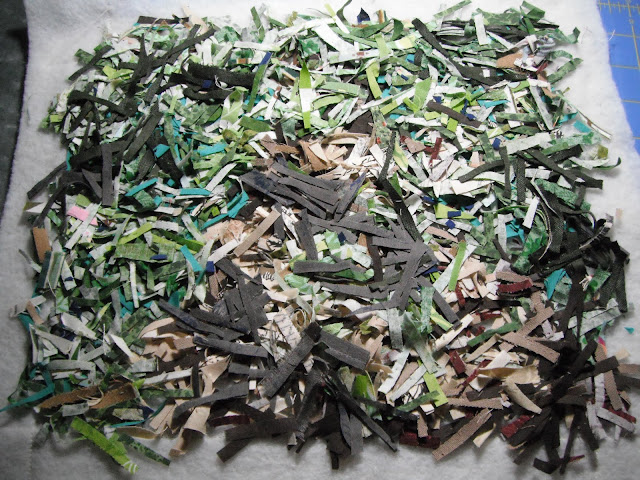 I took another glance at my arrangement next to the picture.  Hmm... messy and mostly not recognizable.  Scary, but I kept pushing through before I could mentally bailout. 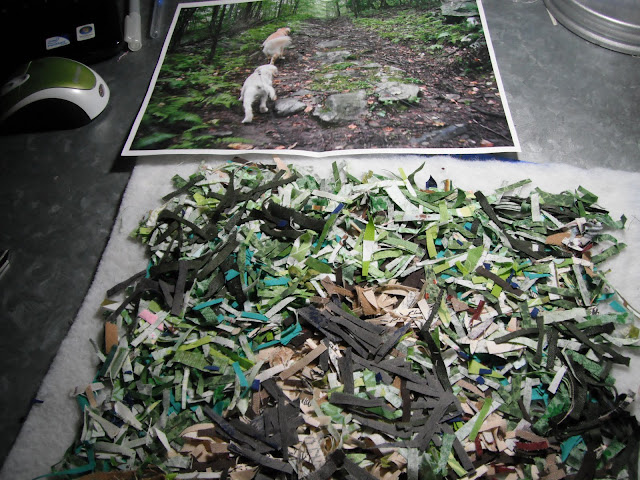 The next step is to cover the confetti arrangement with tulle.  Noriko recommends black tulle.  Of course I couldn't find black tulle, so took a chance with this light gray.

It also took everything I had not to drape this on Sammy as a wedding veil.  Although, I still might at some point. 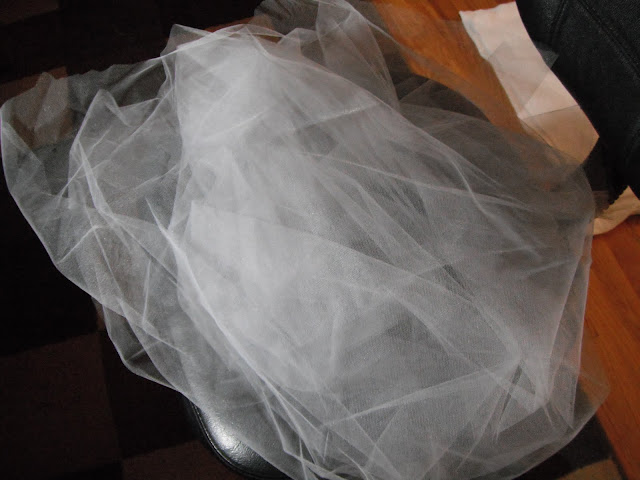 Ok, tulle is on and pinned in place. 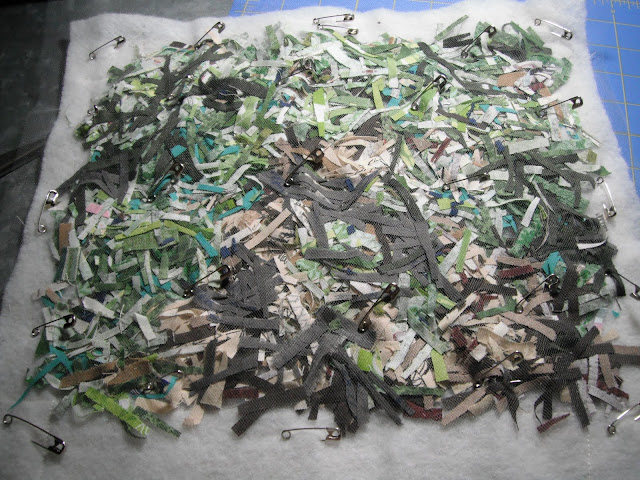 I began my free motion quilting or thread painting.  I blocked out the bigger shapes like rocks and tree trunks and also did a line around the outer edge to hold in all those little scraps in an off white thread.  That was a good move as it allowed me to remove all the pins. 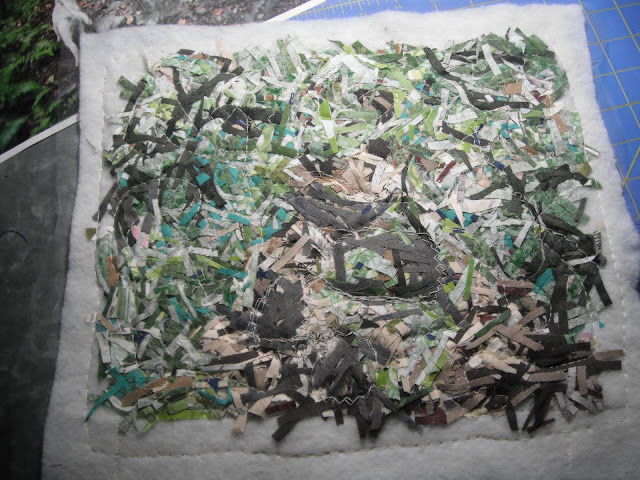 Then it was color time.  Lots of greens. 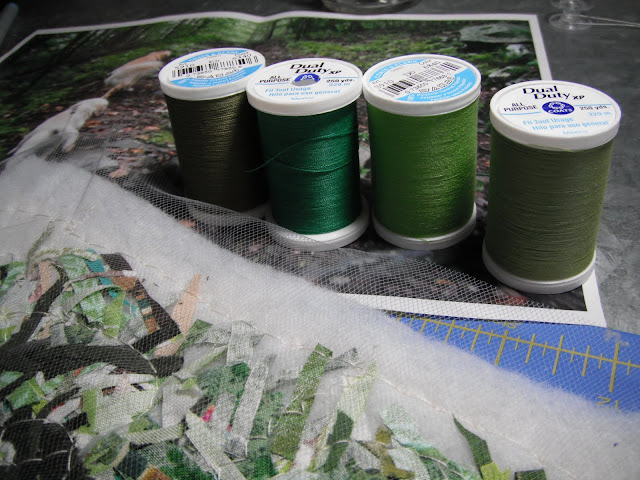 I'm not sure if you can see the difference, but I made swirls of green in all the forest and moss areas. 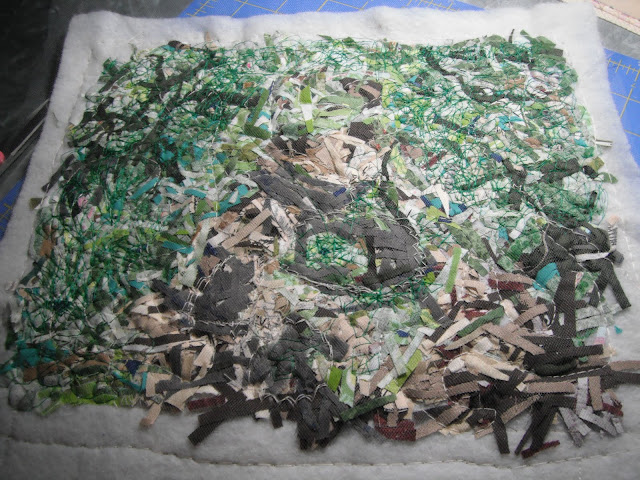 Here is the doodle after I added a lot of brown for the dirt/rocky/mossy/leafy path and some tree trunks. 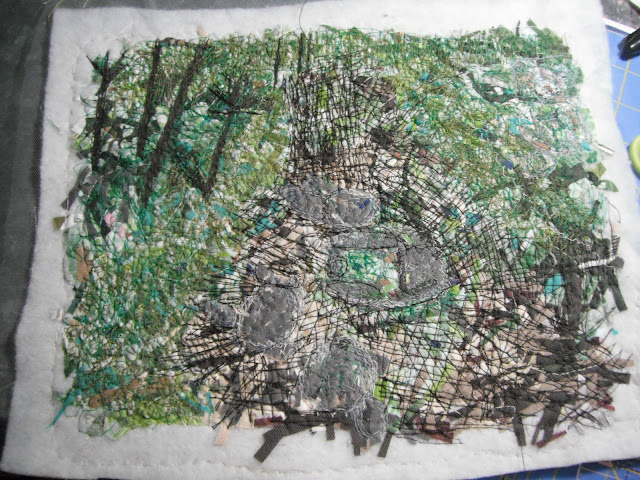 Ok.  I admit I got to this point about two weeks ago and stopped.  Normal creating dislike sunk in.  I found it silly and bad.  I had thoughts of throwing it out.  It was my cue to myself to put the piece aside and let it simmer in my brain a few days.

And, thank goodness for simmering.... I'm in love again.  Renewed vigor!!  I have since done a bit more coloring... and I felt like it was time to start adding the pups.  I have cut them out of a textured white fabric and am pretty excited to add them on and keep on rolling. 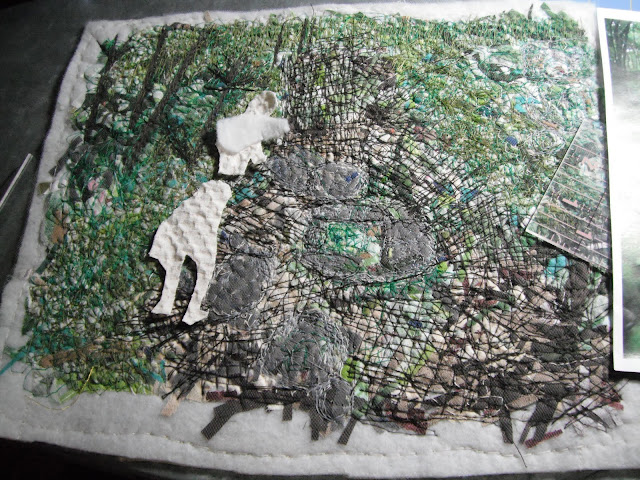 Looking forward to sharing part II of this journey shortly!!  Oh, and I have to laugh... I have already picked out the next picture I want to stitch and decided that it will be even bigger.

AAAAAAAAAAAAAAAAAH! It's sooo perfect! omg Christie - I love it! It was so cool to watch the transformation take place. WOW. It's like painting with fabric and thread.
NICE
~Monika
(wondering if I can "like" you twice. hehe)

WOW!!! What a transformation. It's looking amazing. The progression from a pile a fabric scraps to something that looks like your picture is incredible. You go girl! Can't wait to see how it all turns out. :)

Wow what an amazing idea - can't wait to see the next installment! Saw you on linky party and now gfc following you, Karima www.karimascrafts.com