I bet we all know a dog that 'kills' stuffy toys.  Well, apparently Sammy is one of those dogs.  I talked to our trainer about it and as it turns out 'gutting' or pulling out the stuffing and/or squeakers is a very instinctual behavior that is stronger in some dogs.  Katie didn't really ever go through this.  In fact, she even still has some of her puppy toys from five years ago.  So, I feel really unprepared for this whole experience with Sammy. 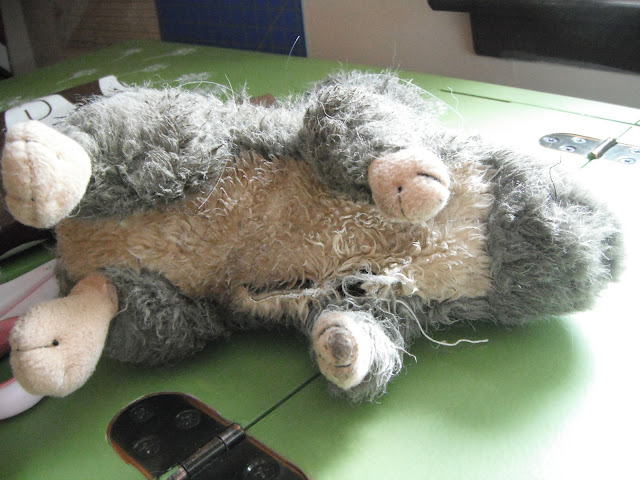 This is a typical scene in the house.  I'll spare you the pictures where the stuffing is everywhere and she's still pulling material out or ripping the fabric.  Dogs!  Does this count as eating for Tasty Tuesday over at Sugar the Golden Retriever?  Sammy sure thinks it does.

Being the dedicated dog momma I am, I would pick up the fluff, stuff it back into the toy, and sew the opening closed again.  I've done this so many times.  But over the last two weeks it's gotten to the point that I would 'fix' a toy and Sammy would have it ripped apart in a matter of minutes.  Argg!  She has even evolved to finding the sewn closure and specifically ripping that spot open.  She knows it's a weakness in the toy.  Argg again! 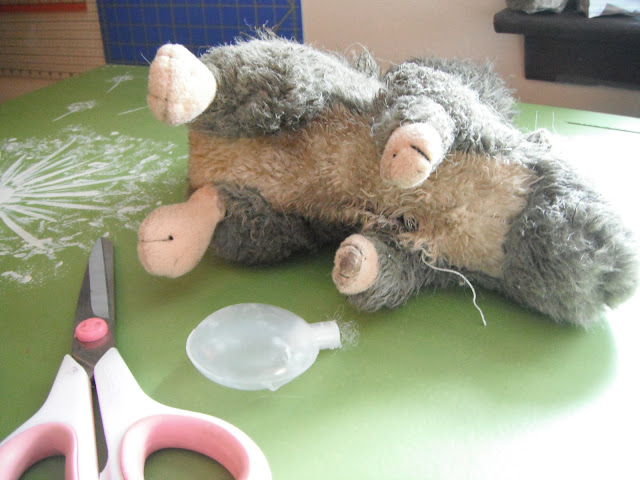 So, what to do?  I had made a huge 'dead' toy pile on the dining room table and needed to either throw them out or reinvent them.  I don't like the idea of throwing them out -- feels like a lot of wasted money. 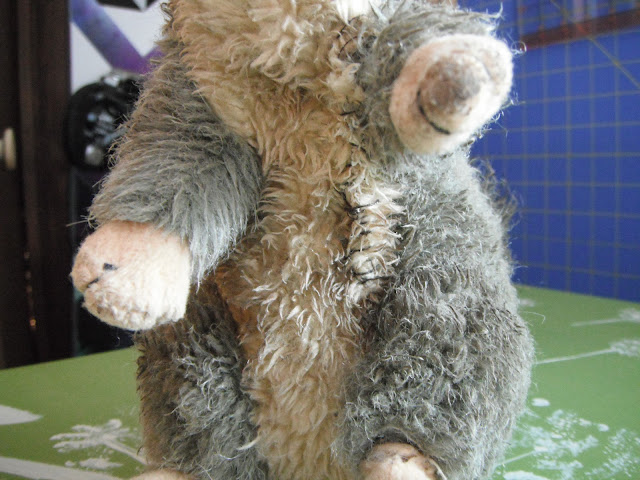 So, here's what I did.  I went through the dead toy pile and pulled out a working squeaker.  Put it into the torn squirrel you see pictured and sewed him back together. 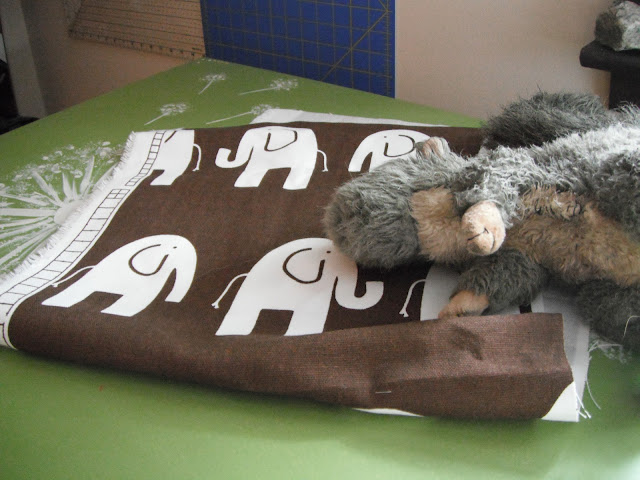 I took some left over home decorating weight fabric and cut a piece to accommodate the size of the toy.  Go ahead and put the right sides together and sew a double seam around three sides of the square.

And since I'm using fabric is a fun way, I'll be sharing this at Fabric Tuesday at Quilt Story.  Maybe it will help other dog mommas! 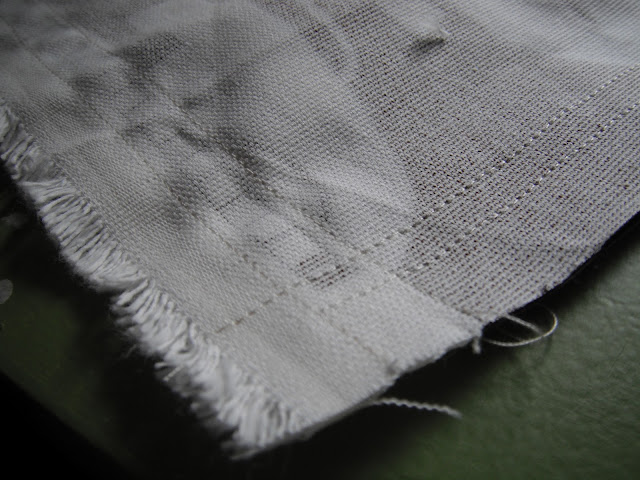 Now, turn the sack right side out.  And admire the cute elephants.  Notice I'm using brown colored fabric.  That should mask some of the dirt, slobber, fur since it will be living in a dogs mouth. 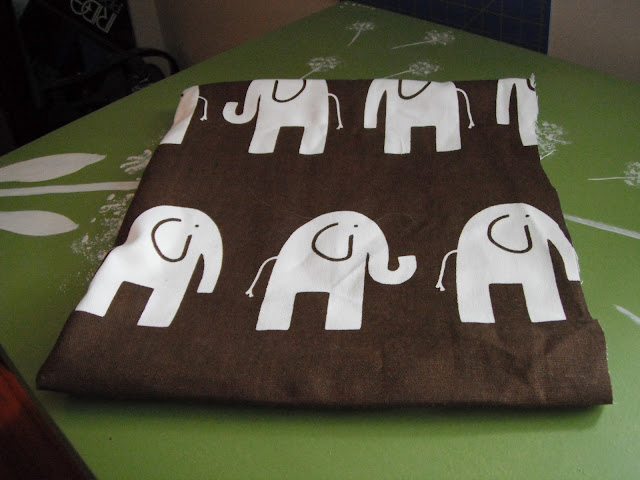 Yup, you guessed it.  The toy is now put in through the remaining open side of the sack.  I said a few words for Mr. Squirrel.  He's been a favorite toy of both dogs for some time now and I'm sad to see him go, but this should be a safer resting place. 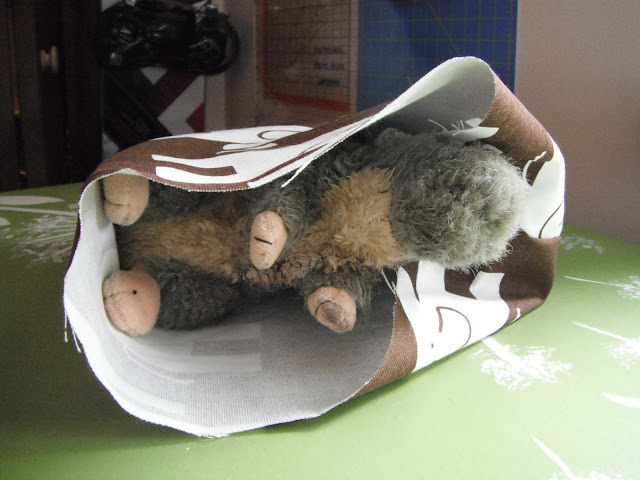 Tuck the opening flaps inward, pin, and sew another double seam all the way around the sack. 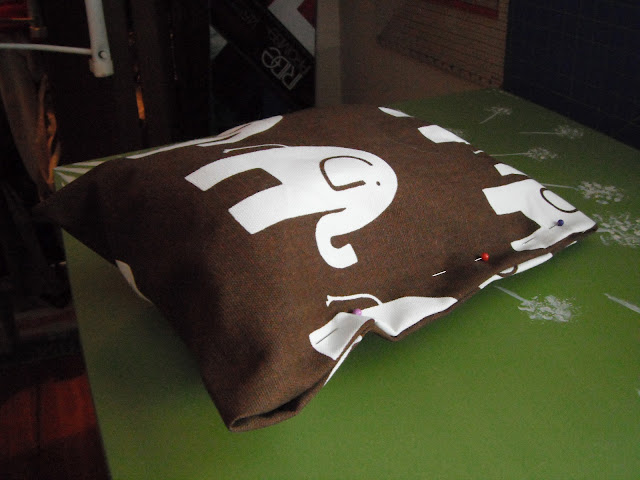 Did I get a finish photo, nope.  Forgot.  Sammy nearly pulled the 'toy' out of my hands when I finished.  Did I get a photo with Sammy running around with her 'Sammy Sack' -- nope.  I was laughing way way too hard.  She's a clown.

So far, this reinvention of soft toys has been a huge success!  Sammy and Katie both love trying to figure out what's inside and have no problem squeaking it.  They have used it as a tug toy between them rather roughly.  And I think I even saw Sammy laying down with it; she's probably scheming how to get to the 'guts'.  But, here we are on day four and the sack has survived!  That's victory around here!

I think more Sammy Sacks are in our future since we have a lot more soft toys to save.  And I think I might even use old jeans for the next ones since that fabric should be able to take the abuse.  Plus, it's reusing times two; once for the dead toy and once for the dead jeans!  I'll try and check in later in the week with the status of the toy and with a playing picture.

haha! Too funny! I also have a dog who likes to gut toys. They typically make it only a few hours in our house. I've tried many many things too, to no avail. The thicker fabrics do work better however. We've found a few super-thick Kong rubber toys that last, and there's always the tennis balls... One BIG problem we encountered with our pup when he was going through this as a youngster, is that he started shredding my pillows and blankets :-O. So I rarely get him fabric chew toys anymore to discourage this...

I love this idea! I have one of those dogs and like you just sew them back together until I get too frustrated/grossed out. Your solution is perfect! Square sack (no weird weak curved seams), heavy fabric. Just perfect! I hope Sammy continues to enjoy the new toy.

Great idea! My Yorkie is a toy destroyer too...you wouldn't know it to look at him..all 6 pounds but he's a killer!

great idea. i too have one of those dogs. i come home to stuffing storms on a regular basis. Will definetly need to give this a try.

What a fan-tab-ulous idea!! Thanks!

Aren't you a clever Mama! Lucky Sammy too!

Mrs. Clever Socks! :) Love the ethos with the jeans - and I have to say that ellie fabric is pretty darned cool too. You're a good fur mamma. :) I'm looking forward to seeing some of those playing photos! :)

You make me smile and tear up at the same time! My Buster dog was the same way! He was a beagle/German Shepherd mix and that guy would have the squeaker out of a toy faster than you can rip the price tag off of it!! LOL
If we took him out to the woods we would put a squeaker in our pocket and he would go NUTZ!!
Oh, I miss that dog!! :)

This is a great solution! I have a dog that is just the opposite of yours. If it has a squeaker - Willow doesn't tear it apart. If it doesn't squeak or the squeaker gets broken and there is no more noise - she guts it for sure. I would love it if you would share this on my linky party Tout It Tuesday. http://www.claimingourspace.com/2012/06/tout-it-tuesday-9.html

Thanks for sharing on Tout It Tuesday!

What a great idea. And I love the fabric too! Thanks so much for sharing on Fabulous Friday at Faith, Trust, & Pixie Dust.