I saw a pin on Pinterest for Apple Cider Donut Holes recently, and pretty much dropped everything and made a batch.  You know... for testing purposes.  The recipe originally comes from Feastie, however, I'd like to share the baking notes I've made after two batches.

These donuts are totally tasty and baked... so healthy, right?  Plus, they give me an excuse to use my mini cupcake pan.  Love that! 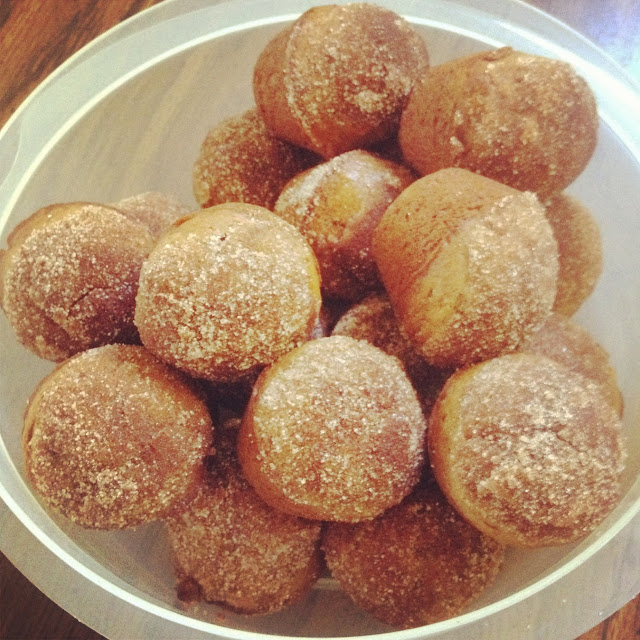 Instructions:
The instructions (#2 and #3) say to mix the dry ingredients in one bowl and the wet ingredients in another bowl... and I actually followed this suggestion and it worked out really well.  I encourage you to do the same!  I'm saying this because I'm the type of person to usually skip the second bowl parts of recipes. 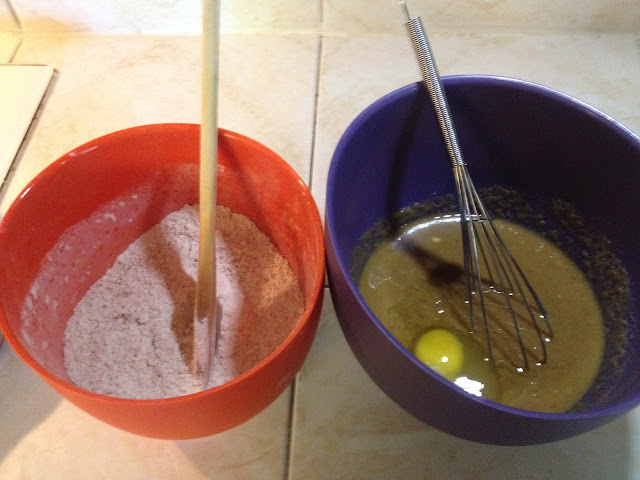 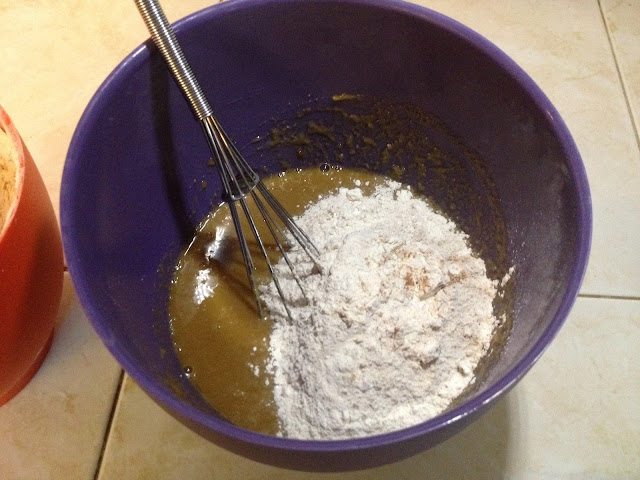 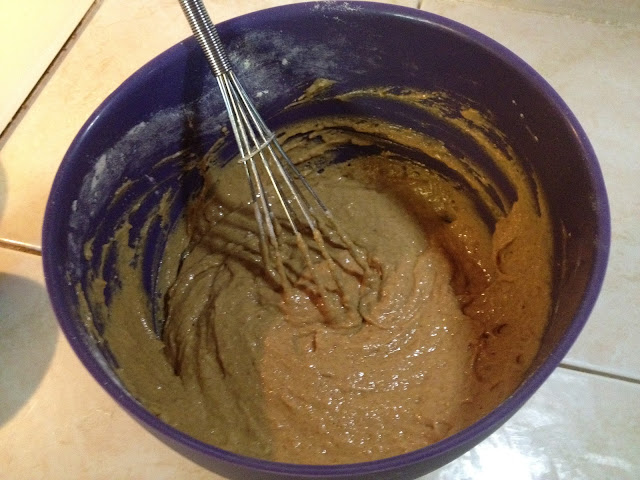 A cookie scooper worked out really well to get the batter in the tiny baking pan wells. 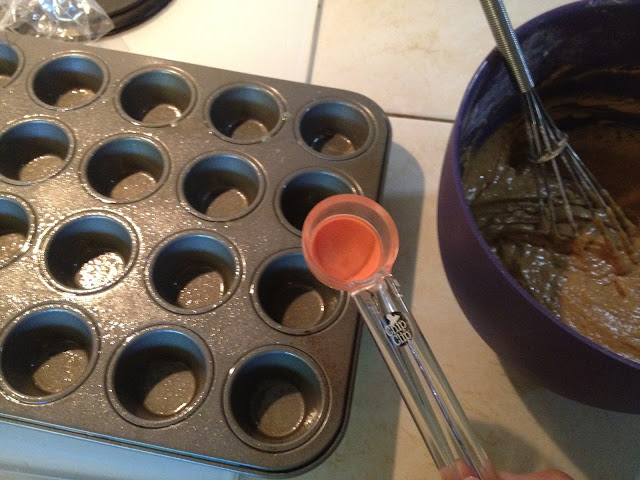 Here are the donut holes fresh out of the oven and piping hot.  I used a tooth pick to test if they were done. 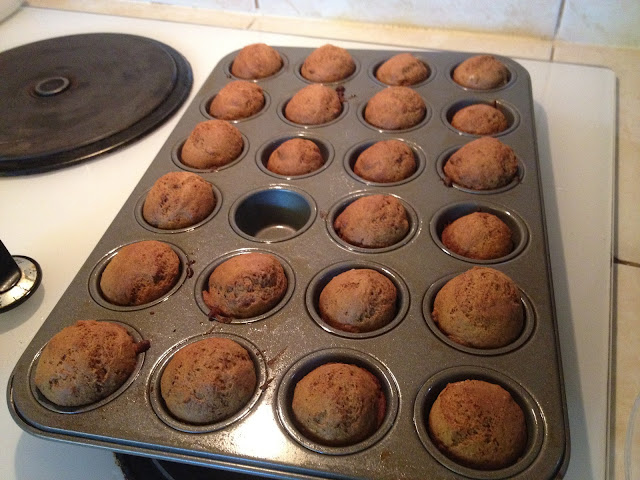 Did I mention these are stinkin' hot?  My Tip... use the tooth pick to also get each donut hole out of the pan.  Sticking the tooth pick in the center allowed me to simply pluck each one out and put on a cooling rack. 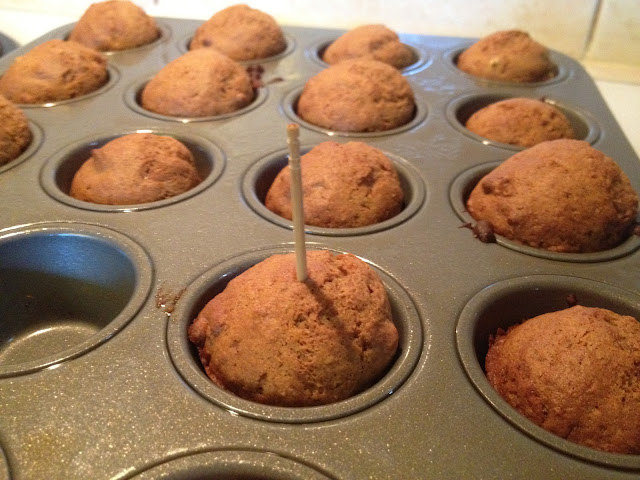 I know the recipe says it makes 24 donut holes.  I made more.  I think I came out with nearly double that.  It's all about how much you fill the wells with batter.  I found that about half way full made a good bite size donut. 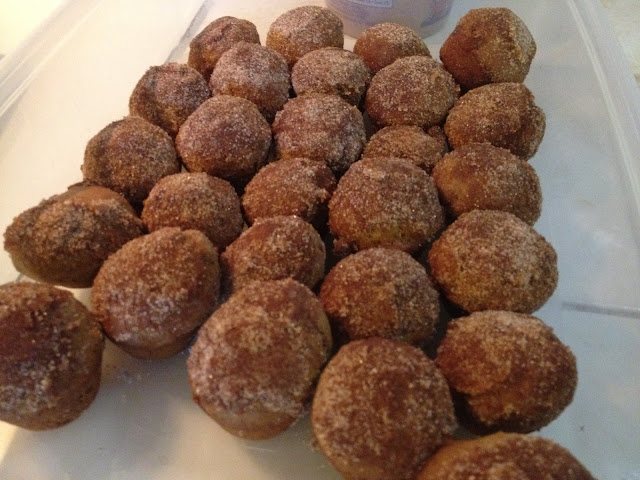 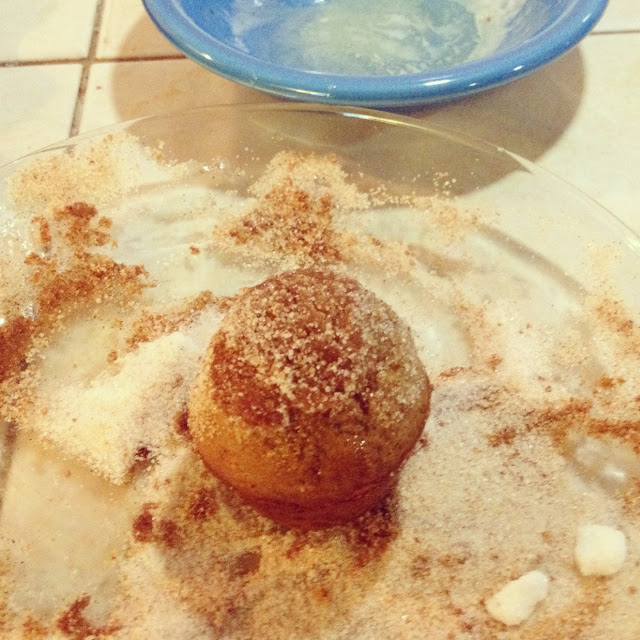 In Batch #One, I replaced the apple butter and yogurt with apple sauce and also used apple juice in place of apple cider.  This batch was so light and fluffy.  Not heavy and they browned nicely.

In Batch #Two, I again replaced the apple butter with apple sauce (simple an ingredient I didn't have handy either time), but followed the rest of the recipe.  This batch was really good too.  I didn't notice much difference between the apple juice vs. apple cider.  However, in this batch the donuts were a little denser, a little tougher.  Still incredible.  I'm not sure if it's the addition of yogurt or that I over stirred the batter this time.

I swear these little bites turn invisible before your eyes and I can certainly see making these again really soon.  Enjoy!
at 11:37 AM

I could use my pear-plum sauce for this! Looks yummy!

Oh thanks for sharing this. My mouth is watering looking at them :))

I will definitely give these a try!

Ok I made them and my boys loved them. I even got "these are better than the bakery!" - wow :-D. I used my fresh pears and plums that I made a sauce out of in my crockpot and used that as my sauce. I didn't have cider show I just put in a splash of water. Yummy!

you're so creative at home. Totally love that. I bet your husband does too. He's one lucky fellow. These look scrumptious btw. :)

They sound perfect!
They are definately going on my list!

I made your Apple Cider Baked Doughnuts and they are wonderful! My husband is requesting them again (I only made them 3 days ago) but I must resist for awhile! We couldn't stop eaing them. Will try the pumpkin ones next.