So, one thing about being home and nursing my allergic reaction was that I found a lot of time for movies and sewing.  And yes, thank you, I am feeling much better -- nearly 100% now.

I am also happy to report that all of my bottled rainbow blocks are sewn!  Aren't they pretty?  I really had a hard time pulling them off the design wall to put them all together, but I am also quite giddy to see what a washing does to the edges of the scraps!  Come on soft fraying! 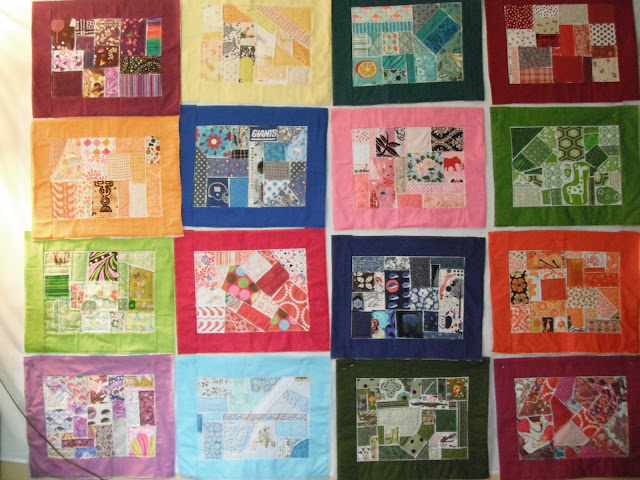 I have had a lot of time take in the beauty around me too and realized that my red rose bush is blooming!  Last year I had one rose late in the summer, this year since the deer seem to really have left my flowers alone, I see a ton of buds coming! 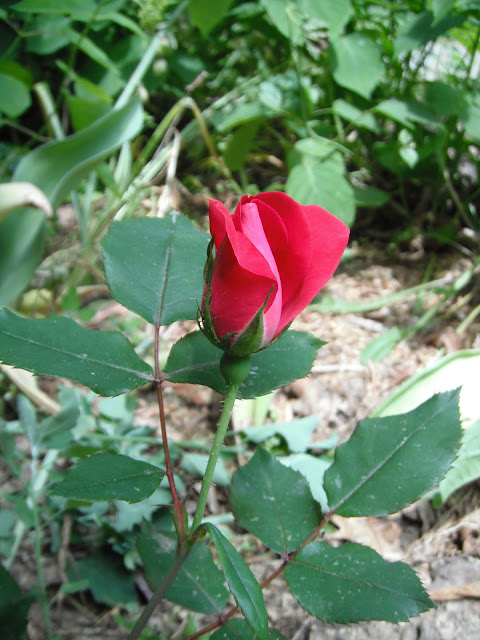 I also am seeing this pink rose bush bloom for the first time.  Again, this was a plant that the deer ate regularly and once the buds were eaten it took a year to nurse the rose bush back to life again.  I had no idea these were pink (it was here when we moved in), and they smell divine! 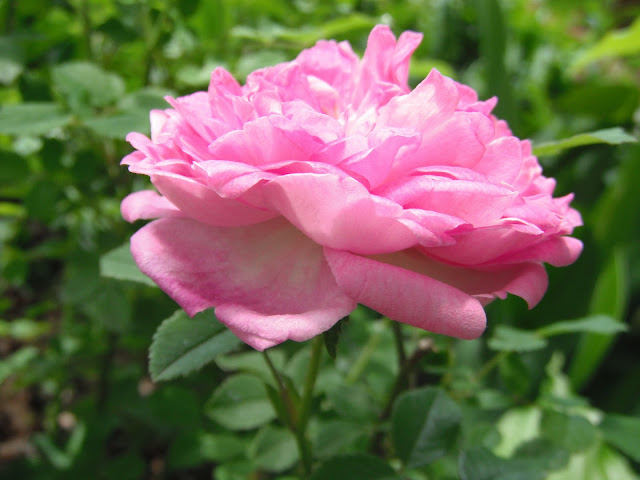 Our mountain laurel is also starting to open up.  I only have one bunch of these flowers on the whole bush, but I removed a vine that must have been choking it as well as some dead branches.  I bet this one makes a nice come back next year.  And in the meantime, I just love this one! 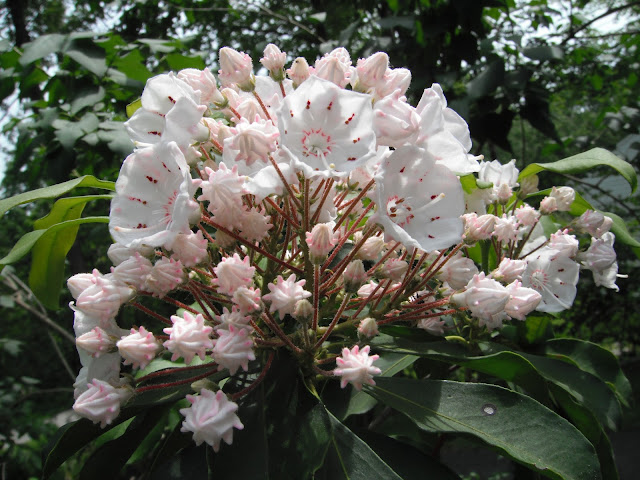 I couldn't resist bringing flowers into the house.  Here is that pink rose.  Really smells so good.  And it doesn't get much cuter than a rose in a tiny mason jar.  I'm also joining the Cottage Garden Party at Fishtail Cottage! 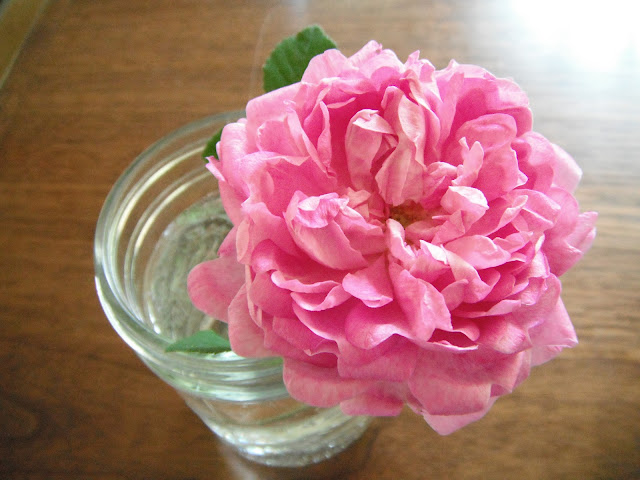 Sammy approved.  And she is a hoot as she had to smell each and every rose or peony I cut and brought in.  This one has such a curiosity for all things, makes me laugh sometimes! 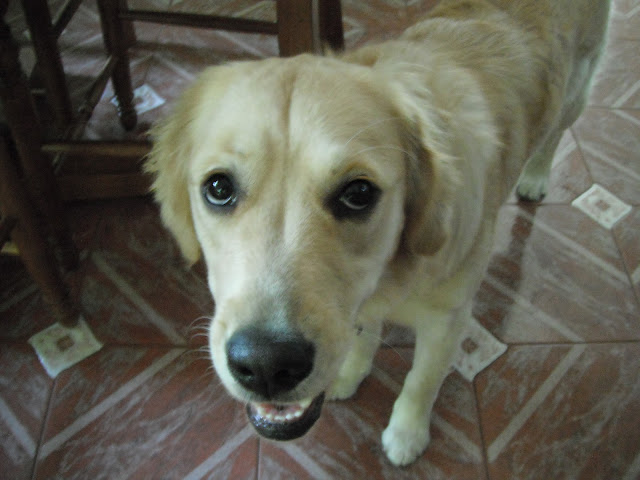 Once I finally mustered the energy, I took the bottled rainbow blocks down one by one and started to put them together.  It's funny piecing with batting already in place. 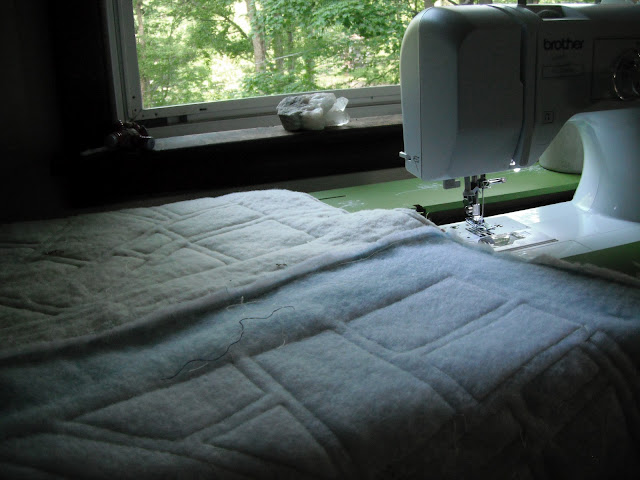 And yes, I am just loving my sewing table.  The extra table arm on the left there was so handy to hold and prop up the weight as the quilt grew in size. 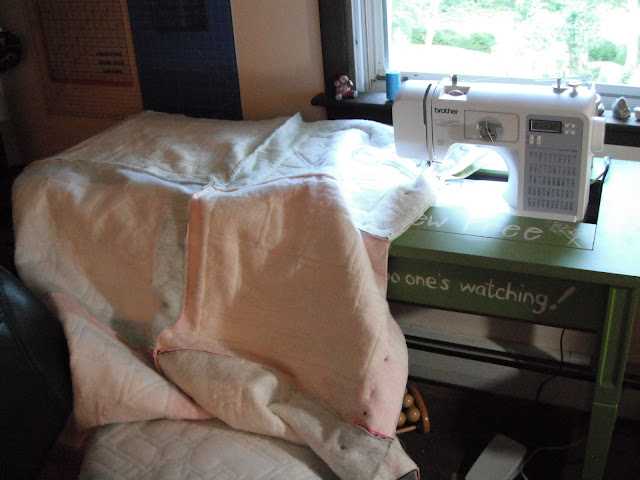 Once the last seam was sewn, I dashed outside to put it on the laundry line to take all that rainbow-y goodness in.  I'm a horrible tease... aren't I? 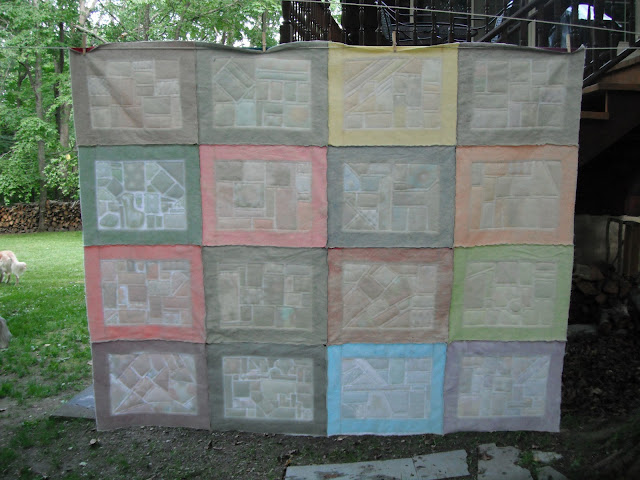 It's everything bright and cheery as I hoped!  I adore seeing all those scraps in a place where they can be enjoyed and the colors are so much fun that you can't help but smile when you see them.

I am also sharing my progress at Quilt Story for Fabric Tuesday.  I haven't had much to share there lately, but it's nice to be back! 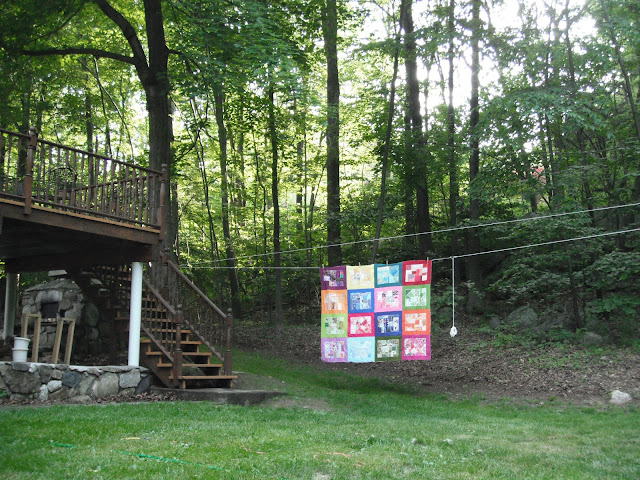 We'll have a closer look at my works in progress tomorrow.  And I've nearly figured out the backing and binding, but haven't started the basting or quilting yet.  Maybe this week.

Thanks for popping in and hope you are easing into the week nicely!
at 10:37 AM

Christie, the quilt looks absolutely fantastic!!! I'm loving all the colours put together. What kind of batting did you use this time?
Your roses and Mountain Laurel look wonderful - I'm sure the ML will come back beautifully. My grandparents had one that grew beside their garage... Grandfather used to prune it back after it flowered and it would be prolific with flowers the next year.
Glad you are feeling so much better!
S x0x

Wow, that mountain laurel is amazing! And I have to say, the novelty of having deer eat my flowers would be just a bit exciting, until I had no flowers left I guess. But deer! In my yard! Oh the delight that would bring. hahah

Your rainbow quilt looks great, how exciting to have it so close to finished :)

Love that Mountain Laurel...such a pretty bloom, both closed and open! Thank you for sharing your post over here at the Garden Party! xoxo, tracie